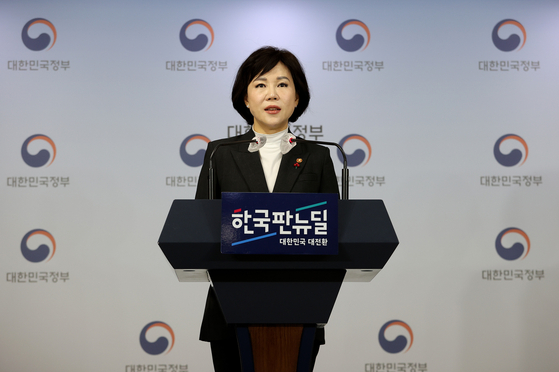 Jeon Hyun-heui, chairperson of the Anti-Corruption and Civil Rights Commission, announces the results of this year’s Integrity Assessment Wednesday at a briefing in Seoul. [YONHAP]

The Ministry of Land, Infrastructure and Transport was rated the most corrupt ministry in this year’s integrity index by the country’s anticorruption watchdog.

The Anti-Corruption and Civil Rights Commission (ACRC) said in a press briefing Wednesday that the overall integrity level of Korea’s public sector in 2020 was 8.27 points on a scale of zero to 10, 0.08 points higher than last year. A higher score means government agencies generally have more integrity. It was the fourth year in a row that the figure rose compared to the previous year.

Every year, the ACRC surveys tens of thousands of people who have experience working with public institutions, as well as people who work inside those institutions, to grade their integrity level in what is known as the Integrity Assessment. The ACRC also looks at each institution’s corruption cases, and along with the survey results, individually gives them scores of one out of five.

The higher the score, the more corrupt that institution is deemed to be.

This year, the ACRC said a total of 208,152 people were surveyed online or via telephone from August to November for the assessment. A total of 580 public organizations were assessed, including ministries, local government offices and public companies.

The Ministry of Land, Infrastructure and Transport was the only central administrative organ that received the worst score of five. Last year, it received a score of three.

Among 17 metropolitan and provincial government offices in Korea, none received top scores of one, while the Gwangju Metropolitan Government was scored as five, the same as last year.

Among the nation’s city government offices, none received top scores of one, while five were rated the worst score of five: Samcheok in Gangwon; Yongin in Gyeonggi; Gumi, Gimcheon and Yeongju in North Gyeongsang; and Suncheon in South Jeolla.