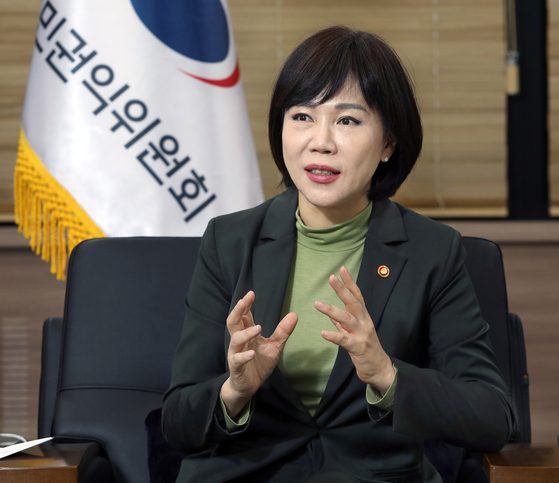 Jeon Hyun-heui, chairperson of the Anti-Corruption and Civil Rights Commission (ACRC), talks about this week’s International Anti-Corruption Conference (IACC) and the ACRC’s anticorruption efforts during an interview with the Korea JoongAng Daily last Thursday. [PARK SANG-MOON]

Jeon Hyun-heui, chairperson of the Anti-Corruption and Civil Rights Commission (ACRC), has an unusual track record, to say the least.

She worked as a dentist for six years after graduating from Seoul National University, before waking up one morning and deciding to follow her lifelong dream — becoming a lawyer. Jeon luckily passed the national bar exam and achieved her dream, after which she served two terms as a lawmaker in the National Assembly.

The Korea JoongAng Daily sat down with Jeon at her office in Seoul last Thursday to talk about her recent endeavors at the ACRC and the upcoming IACC. The following are excerpts of the interview, which were edited for clarity.


You will be hosting your first international conference as the ACRC chief amid a global pandemic. How does that feel?


I had many concerns about hosting the IACC in the middle of so much anxiety and uncertainty, but I’m glad we were able to turn the crisis into an opportunity by converting our offline events to online. It’s the first time the IACC will be held virtually, and participation fees won’t be charged, so I hope the circumstances allow many people across the globe to join our discussions and show interest in anticorruption.

Were there any difficulties in planning an international online conference?


It's become the new normal for international conferences to be held virtually, so I don’t think the speakers or participants will feel particularly uncomfortable about it. However, compared to an in-person conference, a virtual conference could lack a sense of vividness, and participants may feel like they can’t communicate as freely as in an offline conference. To overcome these issues, the ACRC will stream the events live online and enable participants to chat with each other one-on-one or in discussion chat rooms on the IACC’s official website. They can also ask questions or present their opinions to speakers live.

Has President Moon relayed any special remarks about the IACC?


President Moon stressed it was important to use the IACC as an occasion to improve Korea’s anticorruption, integrity and fairness. He also mentioned he looks forward to the conference leading global discussions and actions on healing the pain of people suffering from issues of corruption. Last February when Chair Huguette Labelle of the International Anti-Corruption Conference Council visited Korea and met him, he mentioned his own fruitful experience preparing for the 11th IACC as the presidential senior secretary for civil affairs, when it was last held in Korea in 2003.

I heard there will also be a plenary session specifically about Korean anticorruption efforts. Who are the speakers and what will they discuss?


Drago Kos, chair of the OECD [Organisation for Economic Cooperation and Development] Working Group of Bribery, and Mohammad A. Aldekhail, director of the Saudi Oversight and Anti-Corruption Authority, will discuss the current state and future of the international society’s integrity strategy. [Korean] Minister of Food and Drug Safety Kim Gang-lip will talk about government policies to prevent the spread of the coronavirus and how a society of trust is directly connected to the public’s safety. I will introduce various anticorruption policies [that the ACRC] has pursued [over the years] to solve anticorruption issues that arose during Korea’s compressed economic growth process.

Do you think Korea's anticorruption drive will benefit from the IACC? If so, how?


I think the fact that Korea is hosting the world’s largest anticorruption conference is proof that [the world] thinks highly of the country’s efforts to continuously improve its anticorruption system and policies, while overcoming big and small crises peacefully and democratically through unifying the public’s passion toward a clean society. I hope hosting this year’s IACC enables the world to see Korea as a leading country in rapid economic growth, successful democracy, anticorruption and integrity. I also hope the conference helps the nation add momentum to its pursuit of anticorruption.

What do you think is the biggest obstacle for the Korean government in implementing anticorruption policies? How is the ACRC trying to overcome that?

Korea’s Corruption Perceptions Index [CPI], which measures the perceived level of corruption in the public sector and is announced every year by the Berlin-based nongovernmental organization Transparency International, has risen over the past three consecutive years. [The higher the score and rank, the less likely the country’s public sector is perceived to be corrupt.]


Among 180 countries, Korea’s global rank has gone from 51st to 39th over the past three years of the [Moon] administration. It’s a positive sign that domestic and international assessments of Korea’s integrity are improving, but compared to the country’s high stature in the international society, there’s certainly room for improvement. I think one reason why Korea’s CPI isn’t high enough is that the general public has really strict standards about anticorruption, even though society’s actual level of integrity and anticorruption is really high. The ACRC is trying to tackle this gap through creating new policies targeting corruption.

The ACRC has also been talking a lot about amending the Improper Solicitation and Graft Act.

How does integrity lead to economic growth?


A society that’s clean and has no corruption means people in the public sector and private sector do their jobs to the fullest knowing their companies will grow [from their dedication], whereas in a corrupt society, people are more focused on giving bribes rather than doing their jobs diligently.

You started off your career as a dentist. Why did you become a lawyer?


From a young age, I’ve always wanted to work in the legal profession. But my parents wanted me to become a doctor, so I followed their dreams and became a dentist. But one day while working as a dentist, I suddenly felt like I wanted to pursue my childhood dream before I died. So I gave it a shot and was lucky enough to succeed.

Does your previous job in dentistry help you in any way now?


Dentistry is a natural science major, so that means I studied both natural science and liberal arts, which I think allows me to have a more balanced perspective on things. This helps me a lot carrying out my job as head of the ACRC.

What’s your goal as the ACRC chief?


In the long term, I hope the ACRC’s anticorruption efforts help build a more corruption-free society and boost the country’s CPI into the world’s top 20.