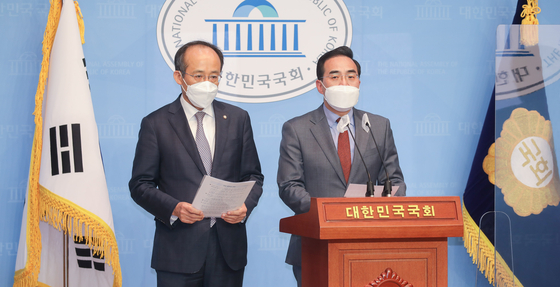 From left, People Power Party lawmaker Choo Kyung-ho and Democratic Party lawmaker Park Hong-keun both on the Special Committee on Budget and Accounts announces the agreement made between the two rivaling parties on the 2021 budget at the National Assembly in Yeouido, Seoul, Tuesday. The parties have agreed to pass the budget at the main floor of the National Assembly on Wednesday. If so it would be the first in six years that the budget passes the legal deadline on Dec. 2. [YONHAP]

Agreement came early on a budget for next year of 558 trillion won ($504.4 billion), which could be passed on Wednesday, the legal deadline.

If so, it will be the first time in six years for the budget to be passed on time.

The ruling Democratic Party (DP), the main opposition People Power Party (PPP) and the government on Tuesday agreed on an expansive budget to counter the impact of the coronavirus pandemic.

The budget they agreed to was 2.2 trillion won — or 0.4 percent — more than the 556 trillion won proposal by the government. This was the first time in 11 years that the budget was higher than the proposal.

A total of 7.5 trillion won was added to the government proposal, which included 3 trillion won for a third round of emergency relief grants for the public, and 900 billion won to be used on Covid-19 vaccine purchases.

At the same time, the parties and government agreed to slash 5.3 trillion won from the government's proposal, including some cuts to the Moon Jae-in administration's so-called Korean New Deal budget.

The 2.2-trillion-won net increase will likely be financed by government bonds, although details are not finalized.

The national debt as of the end of September had already exceeded 800 trillion won, an all-time record.

Choo Kyung-ho, a PPP lawmaker on the National Assembly’s Special Committee on Budget and Accounts, said his party wanted to make changes without increasing the budget and work within the government's proposed 556 trillion won. The PPP is against more national debt.

“We tried, but as expected it wasn’t easy for the government to cut its earlier proposed budget,” Choo said.

While the details still have to be ironed out, both the DP and PPP said the third round of emergency relief grants will likely resemble the second, which was distributed to certain small businesses most affected by the pandemic.

In the first round in May, 400,000 won to 1 million won was distributed to all Korean households. The second round in September gave up to 2 million won to small businesses hurt by the social distancing measures instituted after the resurgence of Covid-19 in mid-August through September.

“It’s not a universal distribution,” the PPP’s Choo said. “It will likely be selectively given to businesses that were hurt by Covid-19.”

Park Hong-keun, a DP lawmaker on the same committee, said the total vaccine budget will be 1.2 trillion won after adding 300 billion won approved in an earlier supplementary budget.

“With this budget we will be able to secure vaccines for up to 44 million people,” Park said. That’s 70 percent of the total population in Korea.

However, the DP lawmaker raised questions on whether every person in the country needs to be vaccinated.

“While we will keep the stance of basically vaccinating the general public so the people won’t have to worry, we will leave final judgement [on the necessary amount of vaccines] to the experts including the Korea Disease Control and Prevention Agency,” Park said.

“We believe that additional support was inevitable to certain businesses and certain classes that have been affected by the third wave of Covid-19,” Finance Minister Hong Nam-ki said via Facebook.

Hong said the government will draw up details of the agreed budget so that it will be approved during Wednesday’s National Assembly meeting.

“We will further speed up our work so that the budget will immediately be executed on the first day of next year,” Hong added.

The National Assembly plans to hold a vote on the 2021 budget at 2 p.m. Wednesday.