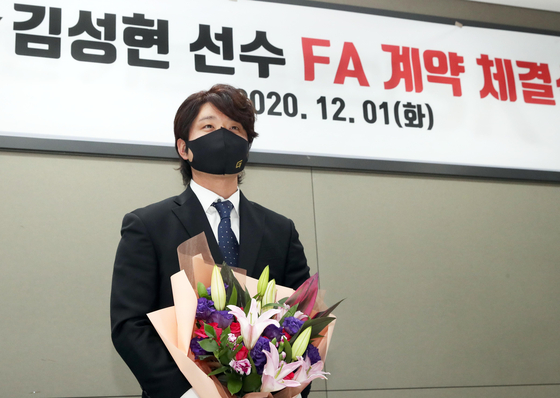 SK Wyverns infielder Kim Sung-hyun poses for a photo after signing his free agent contract with the SK Wyverns on Tuesday. [YONHAP]


Kim Sung-hyun of the SK Wyverns became the first free agent to sign a contract for the 2021 season.

The Wyverns announced Tuesday that they’ve signed a two-year contract, with an option of another year, with free agent infielder Kim at 1.1 billion won ($996,000).

Of his 1.1-billion-won contract, 300 million won is for options.

Kim made his KBO debut with the Wyverns in 2006 and has exclusively played for the team since then. Throughout his 13 seasons with the Wyverns, he had a career .276 batting average with 876 hits and 423 runs throughout 1,140 games.

With the signing, the Wyverns successfully managed to keep their own free agent and became the first club to sign an FA this offseason.

This season, a total of 16 players are registered for free agency and of that total, Kim is the only free agent for the Wyverns. The Doosan Bears have the most free agents, at seven.