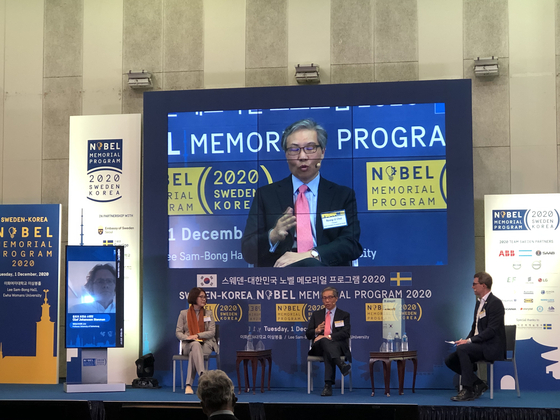 From left, Yi In-sil, professor of economics at Sogang University; Choi Byung-il, president of the Korea Foundation for Advanced Studies; and Anders Hektor, science and innovation counselor at the Embassy of Sweden in Seoul during the ″Sweden-Korea Nobel Memorial Program 2020″ at Ewha Womans University in Seoul on Tuesday. Olof Johansson Stenman, professor of economics at University of Gothenburg, joined the forum virtually. [EMBASSY OF SWEDEN IN KOREA]


The Nobel Prize in medicine this year will likely hold more significance as the world struggles with the pandemic, said Mathias Uhlén, a professor at the KTH Royal Institute of Technology in Sweden, during a forum hosted by the Swedish Embassy in Seoul on Tuesday.

“It took almost 20 years until we knew more about the hepatitis C virus, until we had good diagnostics and good treatments,” the microbiology professor said, joining the “Sweden-Korea Nobel Memorial Program 2020” virtually. “What is happening with SARS-CoV-2 [the virus that causes Covid-19] is very different. We’ve only known it for a year, and now we have thousands of publications, and I think we will very soon have a vaccine, so it kind of shows how science has moved on.”

The forum was hosted at Ewha Womans University in Seoul, organized by the Swedish Embassy in partnership with universities in Korea and Sweden. At the end of each year, Nobel Prizes in Physics, Chemistry, Physiology or Medicine and Literature are awarded in Stockholm, Sweden. The Nobel Peace Prize is awarded in Oslo, Norway.

This year’s Nobel Prize in Physiology or Medicine was awarded to Harvey J. Alter, Michael Houghton and Charles M. Rice for their breakthrough discovery on the hepatitis C virus.

The three scientists’ discovery will enable faster development of antiviral drugs on hepatitis C, possibly bringing the world closer to the eradication of the virus in the world.

“I think it’s very interesting to see how the three scientists’ research, conducted at differing times, came together through their publications,” Oh Yu-kyoung, professor of medicine at Seoul National University, said during the forum. “They certainly hold more meaning because we are at an age where researchers in medicine need to cooperate for solutions on the pandemic.”

“It’s interesting to note that among the dozens of female Nobel laureates, the smallest pool of them are laureates for economic sciences,” said Yi In-sil, professor of economics at Sogang University. “The field of economics has long been dominated by the male population, and if you really think about it, many economic theories and predictions assume men to be at the center of economic activities, which is less true today than before.”

Some of these trends among Nobel laureates are expected to change, said Olof Johansson Stenman, professor of economics at University of Gothenburg.

“The fraction of female economists around the world [is increasing] rather rapidly,” Stenman said. “There is a time lag from that to becoming a Nobel laureate but I think over time there will be a more even distribution.”

Korean experts who joined the forum from literary circles said that the selection of Louise Gluck was a surprise to many.

“When it was announced that Gluck would be awarded the Nobel Prize in literature, there was a bit of a confusion on the part of media and publications in Korea as there weren’t any works of Gluck translated into Korean,” said Shim Hae-un, editor-in-chief at Eunhaengnamu Publishing. “Many publications are now really looking forward to translating her works.”

But translations of literature, especially poetry, can be tricky, according to Yoo Sung-ho, professor of literature at Hanyang University.

“Some say that poetry uses language that is quite untranslatable,” Yoo said. “Because each word carries such unique traits of culture and ways of life of a people, much can be lost in translation. But I like to think of it this way: When I sit in a recital of Russian poems, I may not be understanding a word of Russian, but still, a bit of what the poet intended the readers to feel somehow makes its way to me, kind of like how music is a universal language. Gluck’s poem, lyrical in nature, would offer the readers moments of peace, which we all desperately need in this time of a pandemic.”

The forum will be an annual event at the Embassy of Sweden in Seoul.