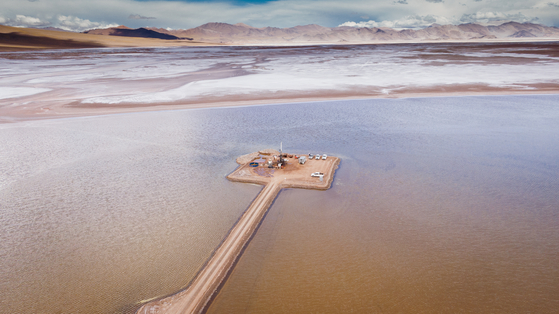 
Posco Group on Thursday said it will boost its businesses related to rechargeable batteries to take advantage of the growing popularity of electric vehicles.


The group behind Korea’s largest steelmaker, Posco, said it will expand businesses in cathodes, anodes, nickel and graphite, which are integral materials in lithium-ion batteries used in electric cars. It also plans to develop technologies that could refine nickel in an eco-friendly method.

“We are the only [group] in the world that supplies raw materials like lithium, nickel and graphite as well as materials including cathodes and anodes, that are necessary for the making of rechargeable batteries,” said Posco CEO Choi Jeong-woo in a statement. Posco plans to “concentrate all capacities to promote rechargeable batteries to its highest level based on its competitive advantage.”

Posco hopes the recent discovery of larger amounts of lithium at its Hombre Muerto Salt Lake in Argentina will help with its plan. The company last month discovered that it has 13.5 million tons of lithium — six times more than 2.2 million tons Posco expected when it bought the rights to mine the lake in 2018. The amount is large enough for the manufacture of 370 million electric vehicles.

The lithium concentration is the highest among other salt lakes, according to Posco.

Posco also plans to invest in refining nickel in an eco-friendly manner based on technologies used in the steel-making process.

As part of these goals, Posco Chemical issued a trillion won ($912 million) in new shares last month. The group’s goal is to generate 23 trillion won in annual revenue and account for 20 percent of the global rechargeable battery materials market by 2030.