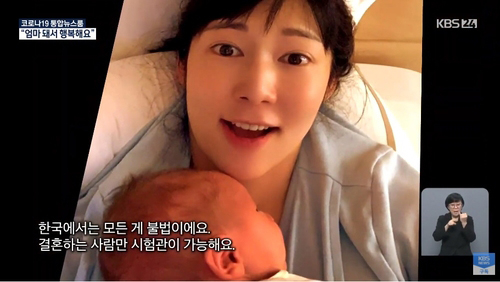 Television personality Sayuri Fujita reveales that she had a child via a sperm donation, without getting married. [KBS]


“The trend among young people is not to have children. If a woman in her 20s says she wants to have children, her friends will be surprised and say, ‘Why? Are you sure?’”

Sogang University economics Prof. Kim Young-chul claimed that young people perceive childbirth as an unreasonable choice. Statistics confirm this. In the Korea Development Institute’s (KDI) research survey on low fertility in March, 55 percent of women in their late 20s responded that they have no intention of having children.

Why? Kim and the research team expected responses including housing, education, child care or work-related issues. But the outcome was completely different. Of the respondents, 48 percent said they didn’t intend to get married at all, and 30 percent said their future was unstable. It was a shocking outcome that could not be interpreted easily. “A whole new world is unfolding. The situation in this group is beyond the understanding of the older generation,” Kim said.

“It is an instinct to want to live with someone you love. But I don’t want the burden of a family. What if you choose to live together without getting married? I cannot imagine having children without getting married. I don’t have the courage to become an unmarried parent and ruin my life. So I don’t want to get married or have children.” This is the representative mindset of a society with a low fertility rate.

Television personality Sayuri Fujita recently revealed that she had a child via a sperm donation. She sent a message that she could become a happy mother on her own without getting married.

Is this a chance to break the negative perception of childbirth? It’s likely insufficient to make people change their minds and consider having children. In many aspects, Sayuri is not an average young woman.

Singlehood is an undeniable global trend. How about devising policies to encourage people to have and raise children alone? KDI’s report on the increasing number of single people and the super low fertility rate discussed this issue nine years ago. The study was criticized for suggesting unmarried partnerships and births outside of marriage. Kim, who wrote that report, said, “The government can no longer encourage marriage because housing prices have increased too much. It is time to systematically acknowledge unmarried household types.”