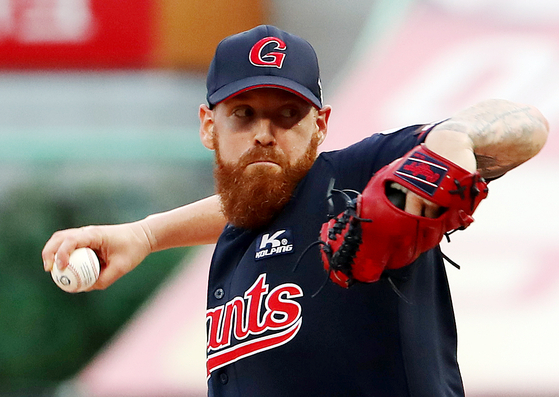 
The Lotte Giants have re-signed foreign pitcher Dan Straily for the 2021 season.

Although there were rumors that Straily may be heading back to the major league, the club announced Thursday that he has re-signed with the Giants with a significant increase in his contract.

Throughout the 2020 season, Straily led the Giants with a solid 2.50 ERA, picking up 15 wins and four losses throughout 31 starts. Not only did he pick up the most wins of any foreign pitcher in a single season in the club’s history, he also topped the league in strikeouts, at 205.

Along with strikeouts, Straily finished second in the KBO’s ERA standing at 2.50.

Straily has also been lauded for his personality off the mound, fitting in well with his Korean teammates and the Giants' coaching staff.

Despite his solid performance in his first season in the KBO, the Giants once again finished shy of earning a spot in the postseason, as they finished seventh in the regular season standing with a record of 71 wins, a tie and 72 losses.

With the signing, the Giants now have a complete lineup of foreign players for the 2021 season. As soon as the season ended, the club announced the re-signing of infielder Dixon Machado and shortly after it, the Giants signed right-handed pitcher Enderson Franco.