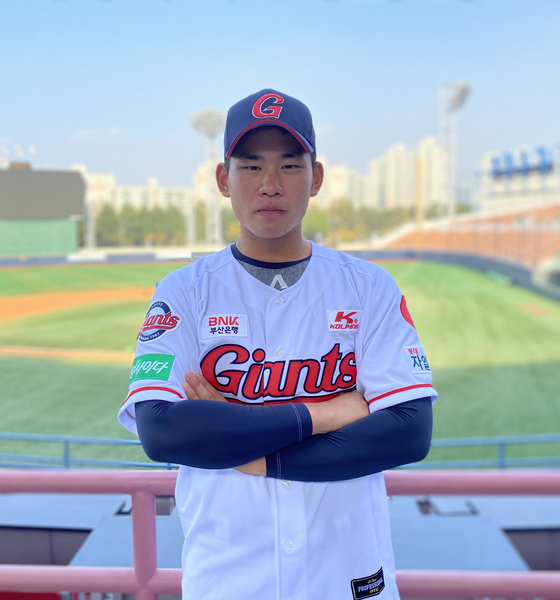 Lotte Giants' rookie pitcher Kim Jin-wook hopes to make as many KBO appearances as possible during his first season in 2021. [LOTTE GIANTS]


For the past four seasons, the KBO’s rookie of the year has been a high school graduate.

Lotte Giants’ pitcher Kim Jin-wook hopes to continue that streak in the 2021 season. Although Kim was drafted in the second round of the 2020 rookie draft, he is good enough to have been a first round pick.

Kim had to be a second round pick on a technicality as he had moved regions during his amateur career. However, looking at his high school stats, he has already set high expectations for his debut in the KBO.

In his last year of high school, Kim started in 10 games, picking up four wins and a loss to finish the season with a 1.70 ERA throughout 36 and two-thirds innings.

As the Giants finished dead last in the 2019 season, they had the first pick in the second draft and immediately chose Kim. Showing their faith in Kim, the Giants gave the young rookie a 370-million-won ($340,000) signing bonus.

Although the left-handed pitcher attended Gangneung High School at the very opposite end of the country, Sajik Baseball Stadium in Busan is still familiar territory for Kim as his father was a Giants fan. As a result, Kim regularly visited Sajik to watch games.

“Not only am I familiar [with the stadium and the club,] I have affection for Lotte,” Kim said. “Visiting Sajik Baseball Stadium and cheering for Lotte when I was little are some of my most treasured memories.”

For that reason, Kim visited Busan last year and volunteered at the Choi Dong-won Baseball Class for kids.

Now its not the kids Kim is hoping to impress, but the entire league.

The KBO's Rookie of the Year award has been won by a new high school graduate every year for the past four years.

Lee Jung-hoo of the Kiwoom Heroes started the streak by winning the award in 2017, followed by Kang Baek-ho of the KT Wiz, Jung Woo-young of the LG Twins and So Hyeong-jun of the Wiz.

“The level of Korean baseball is high,” Kim said. “And watching [those] players make headlines in the KBO allowed me to gain confidence. It’s important to set big goals. Of course, [winning] the Rookie of the Year award is one of my goals. If I try my best in each game, I’m sure the result will come along.”

But looking at the Giants’ rookies, Kim will first have to prove himself within the roster. This season, the Giants drafted catcher Son Sung-bin and infielder Na Seung-yuop. Both players are considered to be the top draftees.

The three are already preparing for the new season as they’ve had their first training sessions at Sangdong Baseball Stadium.

“I’ve had fun training with the friends I got drafted with,” Kim said. “Rather than skill-related training, we focused more on weight training. I can’t really believe I've joined the pros yet.”

Although it’s not yet determined whether Kim will earn a spot on the starting entry, his arrival is definitely expected to give the Giants’ mound strength once again.

“I’m confident in my control and slider,” Kim said. “I think it’ll be good if I can add another breaking ball. I’m aware that the team has high expectations for me.”

As of now, Kim is just hoping to make an appearance in the KBO. But one thing he knows for sure is that throughout his pro career, he wants to become a player like Giants’ outfielder Son Ah-seop.

Although the two play different positions, the lefty pitcher chose Son as the role model for his consistency.

“Son also started his pro career with the Giants,” Kim says, “and not only is he a franchise star, he’s become a fundamental part of the lineup. I highly respect how he can play baseball consistently every season. I hope to learn from that.”

Just like Son, Kim also hopes to be a consistent player. His goal this year is to appear in as many games as possible.

“I don’t really care whether it’s as a starter or reliever,” Kim says. “I just hope to play in as many KBO games as possible in my rookie season. Every day, before I go to bed, I dream of pitching on the mound at Sajik Baseball Stadium. Now that I’ve actually turned pro, I’ll work hard to live up to expectations.”