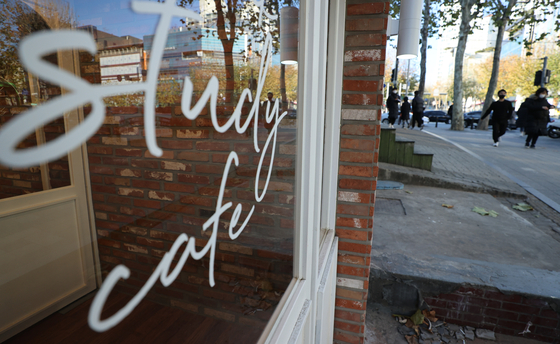 
The Seoul Metropolitan Government announced Friday it will reduce bus and subway services by 30 percent after 9 p.m. and limit operation hours of businesses in an attempt to curb the spread of the coronavirus as Korea passed 600 new cases on Thursday, a nine-month high.

He added that the city will reduce bus services by 30 percent after 9 p.m. starting Saturday and subway services starting Tuesday.

The greater Seoul area has been under Level 2 social distancing measures since Nov. 24 and the government supplemented these rules with stricter regulations on risky businesses such as group exercise classes, singing lessons and saunas last Sunday.

Korea reported 629 new Covid-19 cases as of Thursday midnight, including 600 local infections and 29 imported cases, according to the Korea Disease Control and Prevention Agency (KDCA) Friday, the highest number of daily patients in nearly nine months.

The country reported seven additional fatalities, according to the KDCA, bringing the total death toll to 536.

The push to encourage a curfew of sorts comes as Seoul alone reported 291 new virus cases, a record high since the start of the coronavirus outbreak in January, and Seo warned that the capital was in a “desperately dangerous crisis.”

Seo said, “We have tried to adjust social distancing levels to protect people’s daily lives and prevent the spread of the virus, but amid the snowballing cases, it will be impossible to cope with the crisis with the current measures.”

He noted that the virus has “spread beyond certain facilities into daily life,” and expressed worries of clusters of infections following the college entrance exams earlier this week and year-end gatherings.

The greater Seoul area, also including Gyeonggi and Incheon, accounted for more than 77 percent of total daily cases in Korea. Gyeonggi saw 155 Covid-19 cases and Incheon 17 cases, according to the KDCA.

But areas outside the capital are also seeing more cases, including 31 new cases in Busan, 21 in Daejeon and 22 in South Chungcheong.

Amid the spike in coronavirus patients, the Seoul city government is preparing for hospital bed shortages and looking at installing additional treatment facilities in its 25 districts.

As of Thursday 8 p.m., infectious disease hospital beds in the metropolitan area are at 71.2 percent capacity and 79.8 percent in Seoul itself. With a spike in infections, there are only eight of 61 beds available for patients needing an advanced level of care.

Likewise, there will soon be a shortage of beds in treatment centers, said city officials, and 1,098 of 1,473 beds prepared in seven facilities in Seoul are already filled. Of these, only 93 beds can be immediately used.

The Central Disaster Management Headquarters said in a briefing Friday that it will designate Dec. 7 to Jan. 3 as a special period to strengthen social distancing measures due to concerns over year-end gatherings and parties.

Some 490,000 students took the College Scholastic Ability Test (CSAT) Thursday. Usually, the period right after the CSAT is a moment of liberation for seniors to go out and enjoy themselves after a grueling exam preparation process which they dedicated their high school years to.

The Seoul Metropolitan Education Office likewise on Friday extended remote learning for elementary and middle schools by another two weeks. It had initially planned to resume limited in-person classes starting Monday after suspending physical lessons ahead of the CSATs.

Prime Minister Chung Sye-kyun said the government will monitor the situation over the weekend before deciding whether to adopt further measures Sunday.

Cluster outbreaks continue to spread in the capital.


A hospital in Dongdaemun District in central Seoul saw three additional patients as of Friday, resulting in a total of 25 related cases.

A restaurant located in Jongno District, central Seoul, reported 33 new cases in addition to the first patient who was confirmed Covid-19 positive on Nov. 28. The KDCA Friday said that there was a stage in the restaurant and customers had not been wearing masks during performances.

The Korean Confederation of Trade Unions (KCTU) carried out a smaller-scale rally Friday despite the Seoul city government’s ban on rallies through Dec. 9 amid tightened social distancing measures. Some 160 police officers were dispatched to the scene near the National Assembly in Yeouido, western Seoul.

There was a skirmish between protesters and police at one point as officers tried to disperse the rally. One protester was arrested on the scene for obstruction of duty after assaulting a police officer. 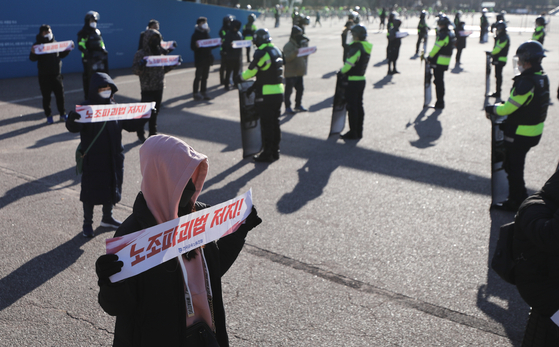 The Korean Confederation of Trade Unions holds a socially distanced really near the National Assembly in Yeouido, western Seoul, Friday amid the city government’s ban on rallies because of the spike in Covid-19 cases, with police watching on. [NEWS1]