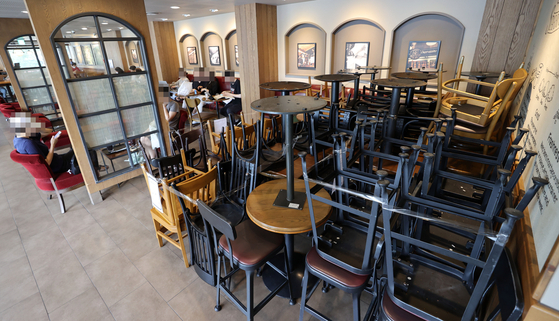 Chairs and tables are stacked up at a coffee shop in central Seoul on Friday afternoon amid social distancing measures. Starting Saturday midnight, all coffee shop chains in the Seoul metropolitan area will only offer take-out services till Sept. 6 midnight. [YONHAP]

Korea added 323 new cases of the coronavirus Friday, down from 371 infections the day before, health authorities announced Saturday morning.

Of the imported cases, five were from the United States, three from India, two each from Bangladesh and the Philippines and one each from Indonesia, Egypt and the United Arab Emirates.

By Friday at midnight, Korea had counted 19,400 coronavirus cases in total.

Hours before a set of upgraded social distancing measures were set to go into effect in the Seoul metropolitan area, Minister of Health and Welfare Park Neung-hoo said Saturday morning in a Seoul press briefing that the country was now in “a severe situation” with the Covid-19 pandemic, and that the upcoming measures were an “inevitable choice” by the central government to prevent people from making “even greater social and economic sacrifice” down the road.

Park particularly urged churches not to hold any in-person activities this weekend, saying face-to-face religious meetings would endanger the rest of society’s “return to normalcy.”

The Korean central government announced Friday that while the Seoul metropolitan area will remain under Level 2 guidelines next week in the three-tier social distancing system, it will be subject to some additional restrictions – mostly tweaked versions of rules for Level 3.

For eight days from Saturday midnight to Sept. 6 midnight, only take-out orders will be permitted at all coffee shop chains. Restaurants and bakeries can offer normal services only till 9 p.m., after which only take-out orders will be allowed till 5 a.m. Hagwon, or private cram schools, with 10 students or more can hold online lessons only, and all in-door sports facilities will be closed. Visits to nursing hospitals and facilities for the elderly will be banned.