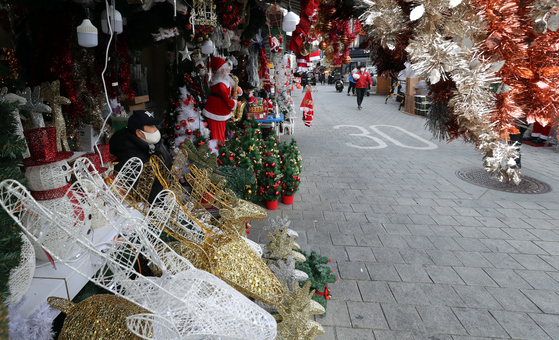 Daily coronavirus cases soared to nearly 700 Tuesday, the second-highest figure Korea has seen since the pandemic broke out.

The Korea Disease Control and Prevention Agency (KDCA) announced Wednesday morning that the nation added 686 new infections the day before, up from 594 Monday. The toll was the highest since Feb. 28, when 909 new patients were counted in the aftermath of the Shincheonji Church of Jesus outbreak in Daegu, which remains the largest cluster Korea has experienced.

Yoon Tae-ho, a spokesperson for the Central Disaster Management Headquarters, said in a Wednesday press briefing that the virus was spreading wider in the greater Seoul area despite upgraded social distancing requirements, which seems to indicate that infected people were going about their daily lives not knowing they were infected because they have no symptoms. 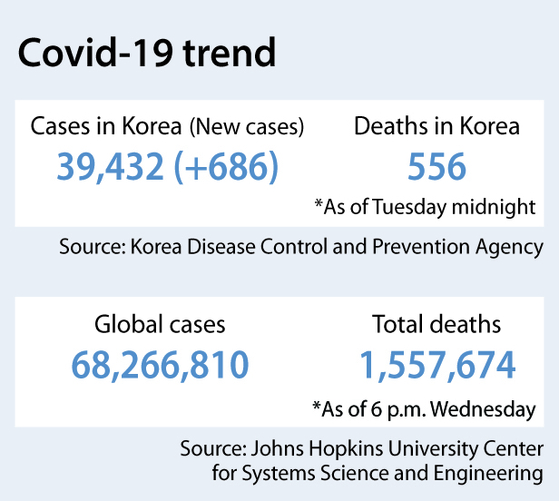 Health officials revealed that over the past week, 582.9 people have been diagnosed with the virus each day on average nationwide, 75.7 percent of which live in the greater Seoul area.

“There’s a higher risk now of catching the virus, so please refrain from any nonessential outings, don’t forget to wear your face masks knowing you can get infected anytime anywhere, and minimize physical contact with others,” Yoon implored.

While presiding over a meeting of the Central Disaster and Safety Countermeasure Headquarters Wednesday, Prime Minister Chung Sye-kyun called on health officials to “focus all resources” on the greater Seoul area as the key battleground to defeat the outbreak, saying heightened social distancing measures weren’t enough.

Chung vowed to crank up testing and epidemiological investigations while securing more hospital beds, but stressed that public participation in the government’s preventive measures was key.

On coronavirus vaccines, Chung reiterated Health Minister Park Neung-hoo’s statement from Tuesday that the government would spend an ample amount of time verifying their effectiveness before rolling them out to the public, saying inoculations would be carried out at “the right time” in Korea after monitoring other countries using the vaccines first.

Until then, Chung underscored that face masks were “the best vaccines” to protect lives.

Korean health authorities Tuesday said they preordered enough Covid-19 vaccines from several foreign drug companies to immunize 44 million people, or 85 percent of the national population. The first batch is expected to arrive next February or March, but officials did not reveal when the shots would be administered to the public.

Out of 686 people who were diagnosed with the virus Tuesday, 662 were due to domestic infections — 264 in Seoul, 214 in Gyeonggi, 46 in Incheon, 31 in South Gyeongsang, 23 in North Chungcheong, 20 in Busan, 14 in Ulsan, 12 in North Jeolla, 10 in Daejeon, nine in Gwangju, four each in Gangwon and South Chungcheong, three each in Daegu and North Gyeongsang, two each on Jeju Island and in South Jeolla and one in Sejong City.

All of Korea’s 17 major cities and provinces added at least one new case.

The remaining 24 cases were imported — eight from the United States, three each from Mexico and Hungary, two from Germany and one each from Bangladesh, India, Russia, Indonesia, Azerbaijan, Lithuania, Ukraine and Finland.

Four patients died Tuesday, raising total deaths to 556, while 527 patients recovered, bringing entire recoveries to 30,177. As of Tuesday at midnight, Korea had counted 39,432 coronavirus patients in all.