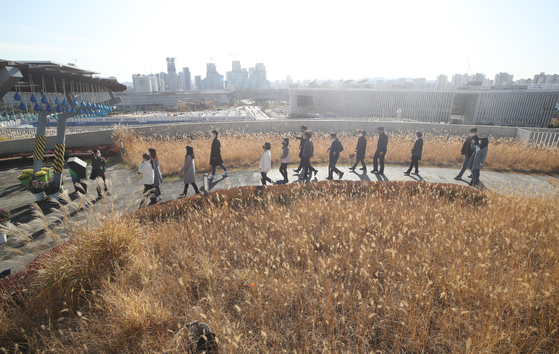 Visitors walk in a rooftop park atop the Central Government Complex in Sejong City on Monday. The park was closed for months due to the coronavirus pandemic.

Daily new cases of the coronavirus dropped below 100 for the first time in six days Sunday, a positive sign for health authorities who were worried about last weekend’s Halloween parties.

The Korea Disease Control and Prevention Agency (KDCA) said Monday morning that 97 new infections were tallied throughout the nation Sunday, down from 124 the day before. Of Sunday’s figure, 79 were local cases: 40 in Gyeonggi, 20 in Seoul, 11 in South Chungcheong, three in Daegu, two each in Incheon and South Jeolla and one in North Chungcheong.

The remaining 18 cases were imported from 12 different countries.

As Korea prepares for a long-haul battle against the virus, health authorities Sunday announced a new, more complex five-tier social distancing system in the hopes of closing various loopholes in the current three-tier scheme, which is set to expire Friday.

The new guidelines were aimed at minimizing shutdown orders for local businesses, while cranking up mandatory preventive measures such as mask-wearing, social distancing and better ventilation. 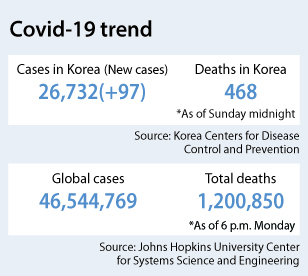 Many small-business owners welcomed the new measures Monday, but others complained they were too broad and confusing, raising the possibility that the complexity could actually hinder the general public from paying proper attention.

According to the new five-tier system, indoor gyms are forced to close in Level 2.5 — the third-highest level — when the average number of nationwide daily cases in the prior week is between 400 and 600. If the government sticks to the guideline, it would be much lenient than last August, when indoor gyms in the greater Seoul area were all forced to close as the country was seeing between 100 and 200 cases per day on average after a large cluster emerged at a church in Seoul.

Yet Mr. Park, who refused to give his full name, said he failed to understand the new guidelines because there were too many.

“I saw the guidelines on the news, but they seemed far too convoluted compared to the current three-tier system,” he said. “I just couldn’t understand them.”