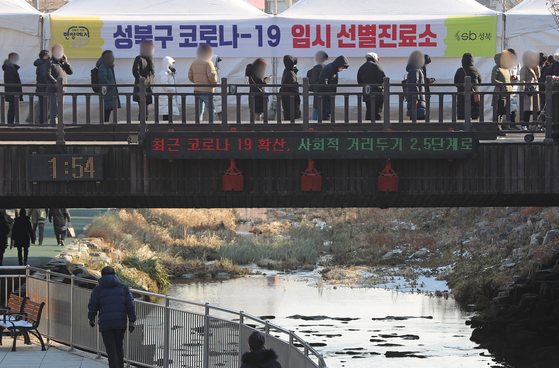 It was the first time a region outside the Seoul metropolitan area — which comprises Seoul, Incheon and Gyeonggi — registered more than 100 cases in a single day since Korea’s biggest cluster broke out at the Shincheonji Church of Jesus in Daegu last February.

Most of North Chungcheong’s new patients were linked to a nursing home in Cheongju and a hospital in Eumseong County.

Aside from North Chungcheong’s 103, there were 382 cases detected in Seoul, 264 in Gyeonggi, 46 in Incheon, 39 in Busan, 32 in South Gyeongsang, 29 in North Gyeongsang, 27 in Gangwon, 24 each in South Chungcheong and on Jeju Island, 20 in Daegu, 13 in North Jeolla, nine in Gwangju, seven in Ulsan and five each in Daejeon and South Jeolla.

Among the country’s 17 major cities and provinces, Sejong City was the only region that didn’t add a new case.

The remaining 24 cases were imported — 14 from the United States, four from Russia, two from China and one each from Azerbaijan, Ukraine, Malta and South Africa.

Fourteen patients died, raising total deaths to 659, while 352 people recovered, bringing entire recoveries to 34,334. As of Friday at midnight, Korea had counted 48,570 coronavirus patients in all.