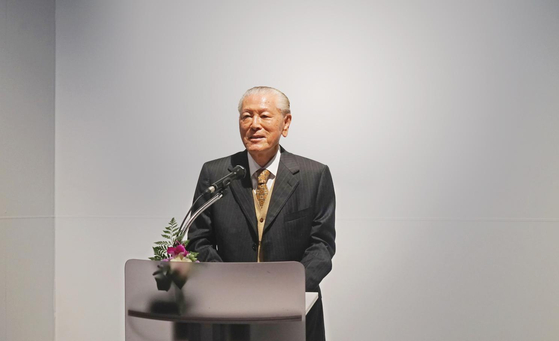 Sohn Chang-keun, 91, will receive the prestigious Geumgwan Order of Cultural Merit, the highest honor in the annual Korean Cultural Heritage Awards, to honor his donation of "Sehando," National Treasure No. 180. [CULTURAL HERITAGE ADMINISTRATION]


Sohn Chang-keun, who recently donated a historic painting by Chusa Kim Jeong-hui, will become the first recipient of the Geumgwan (Gold Crown) Order of Cultural Merit, the highest honor in the annual Korean Cultural Heritage Awards.

Early this year, the 91-year-old Sohn, who was bestowed with the valuable painting by his late father Sohn Se-ki, decided to donate the painting to the National Museum of Korea, saying that he hoped the "historically significant and artistically valuable work of art can be better appreciated by the public."

Sohn is a well-known art collector who has donated over 300 works of art collected by him and his late father to the museum.

The awards ceremony will take place on Dec. 8 at 2 p.m., at the Korea Cultural Heritage Foundation in Samseong-dong, southern Seoul. It will be streamed live.

Due to his age, Sohn will not attend the awards ceremony. His second son, Sohn Sung-kyu, an accounting professor at Yonsei University, said that he’ll attend the ceremony with his brother and sister on their father’s behalf.