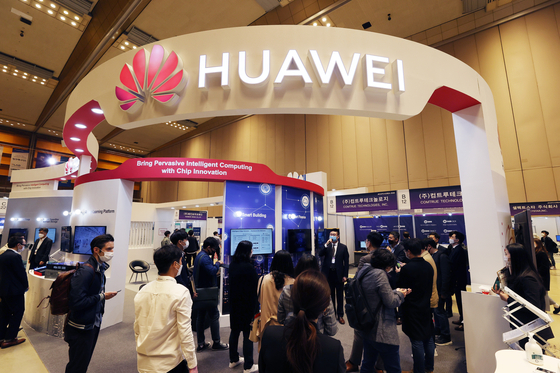 
The U.S. Congress is pushing the Pentagon to reconsider deploying American troops and key weapons systems to countries that use Chinese telecommunications equipment in a bill that could potentially affect the 28,500 U.S. troops stationed in South Korea.

With both houses of Congress due to pass the 2021 National Defense Authorization Act (NDAA) within days, concerns are mounting in Seoul about clauses contained in the bill’s final draft that mandates the U.S. Department of Defense to "consider 5G and 6G security risks posed by vendors like Huawei and ZTE when making overseas basing decisions.”

The NDAA, which outlines the U.S. government’s annual defense spending and policy, would also require the defense secretary to submit a report to Congress detailing the risks posed to U.S. personnel, equipment and operations “due to Huawei 5G architecture in host countries and possible steps for mitigation."

These measures apply to all countries with permanent U.S. troop presences of at least the size of a battalion, as well as those with any “major weapon system” supplied by the United States, according to the bill.

The stipulations appear to be the latest step in the Trump administration’s effort to enlist allies to eschew Chinese telecommunications makers, which Washington says may provide compromised equipment that could give the Chinese government a backdoor to access sensitive data.

Few countries face as serious a quandary as South Korea, for which upholding security ties with the United States could be in conflict with its tight economic relationship with China.

One of the country’s three largest mobile carriers, LG U+, depends on Huawei’s 5G equipment for around 30 percent of its nationwide coverage, which the company insists cannot be replaced for cost reasons.

Though repeatedly urged by Washington to intervene, the South Korean government has so far demurred, arguing the use of Chinese equipment is a decision for private companies to make.

Though countries like Britain and Australia have complied with U.S. demands to freeze out Huawei, other U.S. allies too have been reluctant to jump on the board the U.S.-led “Clean Network” initiative designed to boycott Chinese 5G equipment. Japan in October said it was not banning Chinese kit makers like Huawei from supplying equipment, but that it would take its own measures to address security concerns.

Germany will reportedly give a green light to Huawei to build part of its 5G network, according to an IT bill ready to be submitted to its parliament. The bill reportedly contains a conditional clause that says a vendor could be excluded should hard evidence emerge that suggested security risks existed.

Seoul’s deliberately vague position on the issue may be partly encouraged by Joe Biden’s election in last month’s U.S. presidential election. Though most experts appear to be of a consensus that the president-elect will remain tough on China and will most likely retain restrictions on Huawei, Biden is also expected to take a more conciliatory approach with U.S. allies in building a united front against Beijing.

Antony Blinken, Biden’s nominee for Secretary of State, said in a U.S. Chamber of Commerce seminar in September that Washington should work with allies to set common policies on export controls, investment restrictions and technical standards to ensure “an ecosystem that protects and promotes liberal democratic values.”