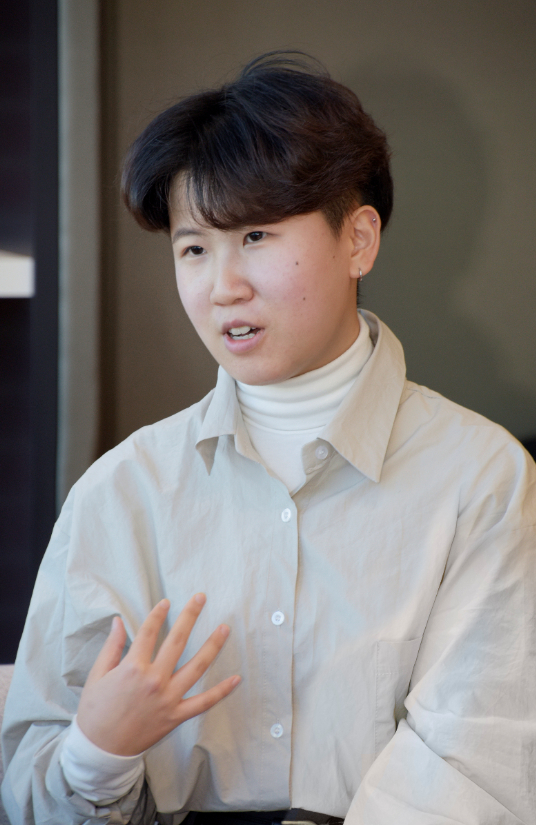 
“A fish doesn’t realize that it’s wet on its own.”

This quote that appears at the beginning of the documentary “Escape the Corset” (2020) sums up the entire message that director Lee Mi-hae hopes the audience realizes through watching her one-hour documentary, set for local premiere on Thursday.

Along with snippets of the director’s own story, the documentary contains excerpts of interviews with women across various fields—actors, students, YouTubers, authors, professors and more—who realize the importance of the "escape the corset" movement. The movement was born from a murder which took place in southern Seoul's Gangnam in 2016, when a man brutally murdered a woman he'd never met before in retaliation against women he'd been rejected by.

It was a breaking point for Korean women who began to come forward with their own experiences of sexual oppression, assault and discrimination, and actively strive for gender equality.

The escape the corset movement constitutes a part in this larger social crusade in which women strip away the conventional forms of beauty expected by society, including abandoning makeup, not conforming to ideal body types and cutting their hair short. 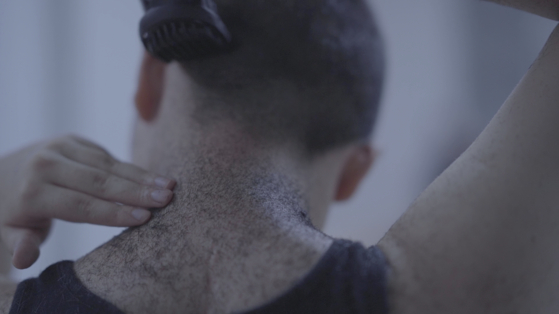 A scene from the documentary ″Escape the Corset″ in which director Lee shaves off her own hair. [STUDIO PADONG]


The documentary puts particular focus on women’s hair and the significance of cutting one’s hair short: You can choose to apply or not apply makeup, to wear or not to wear heels or dresses, but the act of cutting your hair short is much more permanent and can't be reversed until it grows out.

“For me, it was a step-by-step process,” director Lee said in an interview with the Korea JoongAng Daily at its office in Sangam-dong, western Seoul last week. “I first came across the ‘escape the corset’ movement through a friend. She never directly said that she was part of this movement or anything, but she’d cut her hair in a short back and sides hairstyle and she just looked so happy and free. At the time I had bleached my hair and it came down to my waist — but I’ve spent over half of my life devoted to adorning myself and I did not immediately let it all go.”

She began thinking that all the time she’d spend drying her hair, and applying and washing off her makeup had been a waste. She started off by choosing a bob haircut, but after a few months, cut it all off.

“While I was studying [with a bob cut], whenever I bent over, my hair would cover my eyes and that really bugged me,” Lee said. “I thought people with short hair wouldn’t have to care about such things and could completely focus on their work, so why do I have to be bothered by such a petty thing that affects what I’m doing?”

That was in June 2018. Since then, Lee has also tried shaving her head and to this day maintains her short hairstyle, which she sometimes even cuts herself. However, despite how carefree and comfortable she felt, others were not as understanding.

“Relatives would exclaim, ‘Why did you cut your hair like a boy again?’ and my next-door neighbor would comment ‘I thought this house had a son and a daughter, but now it looks like they only have two sons,’” Lee recalled. “And when I shaved my head, [even] my mom, who has never raised her voice [at me] and always supported me in whatever I did, screamed at me. I think we stopped talking to each other for about a week or so.

“[All] I did was cut my hair and not wear makeup [anymore], but so many comments followed after, which was stressful and also lonely for me,” Lee said. “I thought, there would be people like me out there, and I wanted to gather with them to share [our experiences and thoughts] together and record our actions.”

As gender polarization widens in Korean society, a mistaken ideological belief that seems to have been forged is that women who participate in the escape the corset movement are “radical” or “extreme.” Lee’s documentary patiently explains that this is not so. 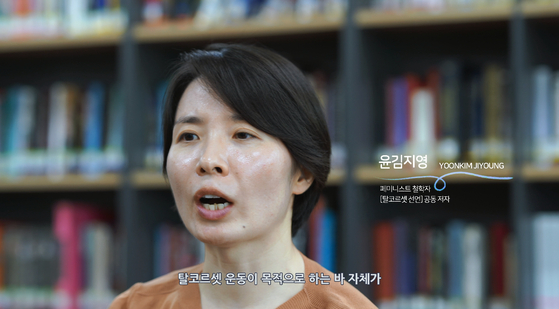 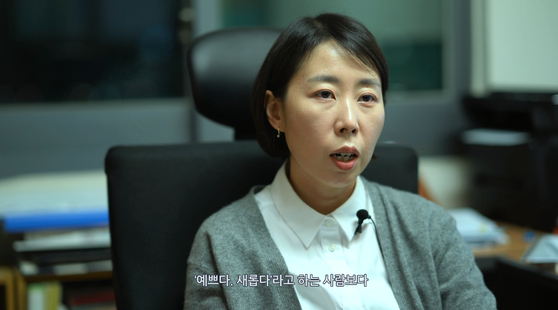 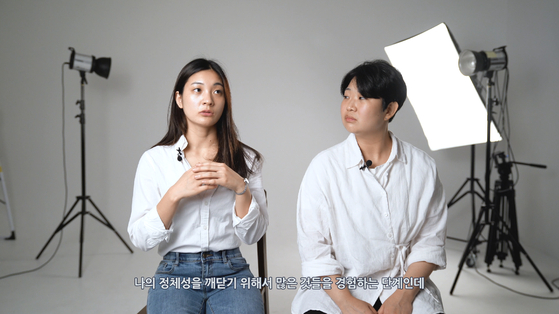 Pictures of some of the interviewees from the film. From the top, Professor Yoon Kim Ji-young of the Body and Culture Institute at Konkuk University, Professor Lee Young-ah of Myongji University and actors Cha Hee-jae and Park Seo-jin. [STUDIO PADONG]


“The freedom to adorn oneself should be accepted, but what should come first is the freedom to not do so,” Lee said. “Because I didn’t know at all that such freedom existed. Of course, I thought women should naturally preen themselves— and all those around me did, or enforced the notion, like my friends, my mother and celebrities. I thought that was what was right. That’s not freedom though.”

In the documentary however, not all of the female interviewees have their hair cut short, and the film does not take on a condescending tone or push for women to participate in the movement.

“For me, the escape the corset movement is the most effective form of feminism that people can apply to their daily lives,” Lee said. “But I do not believe that this movement represents feminism, nor is a haircut all that there is to it. It’s not a dichotomy where one isn’t granted the title of a feminist because they don’t cut their hair or wore makeup. I hope people don’t feel guilty [because they do those things].”

The director hopes that the escape the corset movement can also be a positive influence for the youth of today who are impacted by lookism, which is accelerated by the massive influence they are under from mass media. Lee confided that she herself grew up mimicking the choreography of K-pop songs. She started applying makeup as she entered seventh grade, but said that the age range is becoming even lower nowadays. 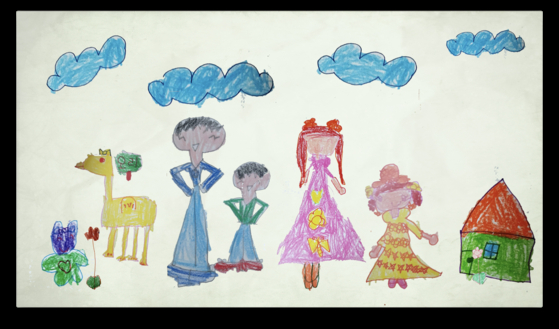 A picture which director Lee drew as a child: Boys with short hair wear pants and are colored in blue, while girls with long hair wear pink dresses. [STUDIO PADONG]


“I initially wanted to become a teacher, so I did a lot of volunteering work teaching kids,” Lee said. “Elementary school students would ask me after I cut my hair ‘Why are you a female teacher when your hair is short?’ or ‘Why did you cut your hair?’ — questions that they never asked when my hair was long. Rather than be hurt by their questions, I felt pity that they had been educated to distinguish people by their hair alone.”

Lee believes that the movement is also meaningful in a sense that it shows and gives children more choices not to define people by their looks.

“Tints and lipsticks are now a must among elementary school children and even if they don’t wear makeup, when they take pictures they use these beauty apps [and filters] which apply makeup onto their faces on the screen,” Lee said. “What’s so twisted in this society today is that children dress like adults and adults dress like kids. If we don’t put a stop to it, it feels like it’s going to turn into a vicious cycle in which children, again and again, will learn and imitate this culture.” 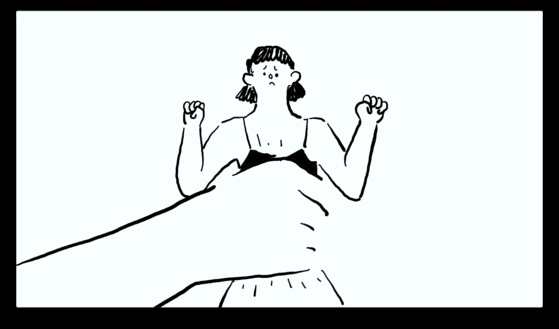 An animated scene from the documentary which depicts how women are confined by corsets. [STUDIO PADONG]


The director understands that participating in this movement can be difficult, especially when an individual has to face the prejudice of society.

“I tried to focus more on myself whenever that happened,” she said. “Not just for this movement but for anything I do, I need to put myself at the center. No matter what anyone says, I think to myself that this is what I believe in and I will continue living this way. Although I do still get hurt by what others say, I became more resilient to them, I think. [The wounds] sting and smart, but almost immediately I recover from them when I concentrate on myself.

“And the escape the corset movement is not just about cutting one’s hair and smearing off makeup,” Lee said. “One of the reasons why I participated in this movement is because I wanted to learn how to look at myself. What I learned was that I really had the chance to properly observe my body. [For the first time] I came to know what my thighs looked like, what my toes are shaped like and realized what my eyes [without makeup] looked like. Moreover, I realized that the heart of this movement is about a shift in body movements—how that boundary [infinitely] expands: I never realized that I could move my body this way, and this really expanded my perimeters. I felt it firsthand through my body.”

Another reason why Lee sticks by the movement lies in its convenience.

“It’s very trivial,” she said. “I suffer from allergies and I can now freely rub my nose, or my eyes when they itch. When I feel sleepy, I no longer have to care about the way I sleep since I don’t have to worry about my makeup rubbing off. [Also] it saves so much time when I wash in the morning. I can now sleep 30 minutes longer. What I hear from others is that it's not anything grandiose, but it’s these little things that make [us] feel free; it’s the happiness that comes from being able to do things that we weren’t able to do before in our daily lives.”

Socially speaking, the director hopes that the escape the corset movement can be a step toward reaching a gender-blind society.

“We are constantly limited by our gender,” Lee said. “I believe that a gender-blind society can be reached when our actions are not bound by whether we’re a woman or a man and when the concept of gender becomes outdated. In other words, it’s about humans being able to live like people and be accepted as just entities.”