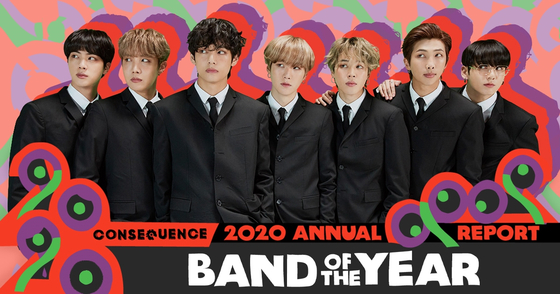 BTS has been chosen as the "Band of the Year" by Consequence of Sounds. [COS]


BTS has been chosen as the "Band of the Year” for 2020 by a New York and Chicago-based online publication on music, Consequence of Sounds.

The American publication said on Dec. 8 that the “K-pop superstars brought joy and a message of hope to a year rife with loss and uncertainty.”

The article recognized the members’ efforts as well, saying that all the members are “endearing and polite and charismatic, and they produce hours upon hours of intimate, docu-style content to enjoy, but these factors aren’t enough to capture global attention in the oversaturated modern media landscape. Instead, it is their passion for their craft that seems to transcend any of the barriers or preconceived notions that stand in their way. BTS is unique, not just in the scope of boy groups but even within the Korean pop world, in that the majority of the group’s catalog features lyrics by the members themselves.”

BTS to attend TMA, an awards show it always wins