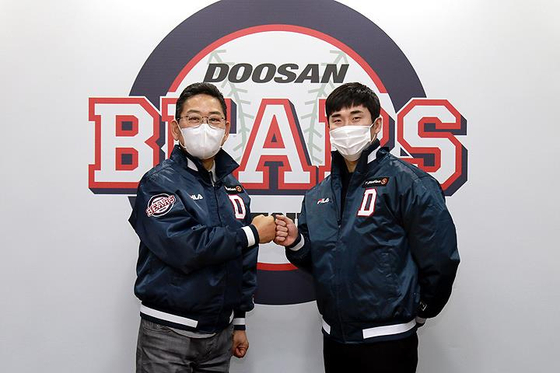 The Bears announced that they signed a four-year deal with an option of an additional three years with infielder Heo Kyoung-min on Thursday at a maximum of 8.5 billion won ($7.8 million). Heo’s contract for the first four seasons, from the 2021 to 2024 season, will see him receive a total of 6.5 billion won — a 2.5 billion won signing bonus and 4 billion won in guaranteed salary.

Heo's decision to stay with the Bears is huge news as he was considered one of the biggest catches in the KBO’s free agent (FA) market this year. Since the Bears are not normally huge spenders compared to other clubs, Heo’s contract comes as a big surprise.

Heo made his KBO debut with the Bears in 2012 and he’s worked his way up to become a crucial part of the team as third baseman. This season, Heo finished with a career-high .332 batting average with 145 hits throughout 117 games.

Throughout his nine seasons with the Bears, Heo has a career batting average of .296 with 984 hits and 408 RBIs throughout 1,046 games.

"Ever since I turned pro, I played in each game with pride as part of the Doosan Bears," Heo said. "I'm thankful to the club for this offer. Rather than be very happy, I also feel a lot of responsibility. I'll continue to push myself in every game."

The Bears have the most free agents this season, at seven. As the 10 clubs have struggled financially this season due to the coronavirus pandemic, it was unclear whether the Bears would be able to retain all seven of the free agents.

Of the seven, Heo, first baseman Oh Jae-il, second baseman Choi Joo-hwan and outfielder Jung Soo-bin were expected to be the big names in the FA market.

Now that they’ve signed a huge contract with Heo, it’s unclear whether the Bears actually have the cash to hold onto Oh, Choi and Jung. Both Oh and Choi are reported to have already held talks with other KBO clubs.