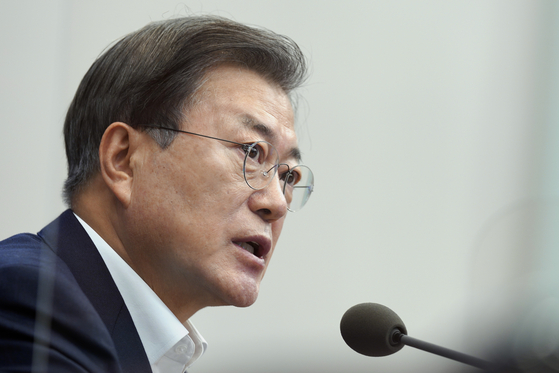 The Realmeter poll, conducted from Monday through Friday last week, found that Moon’s approval rating dropped 0.7 percentage points from the previous week’s survey. The president’s approval rating was the lowest since he took office in May 2017. 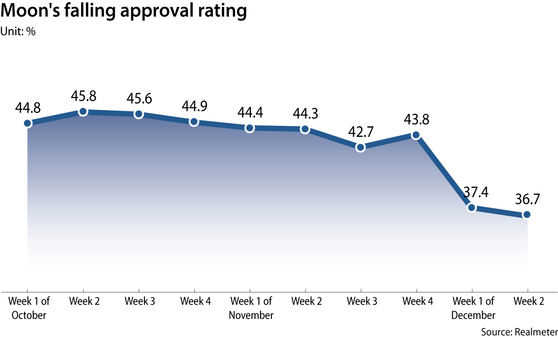 His disapproval rating was 58.2 percent, up by 0.8 percentage points.

The poll has a 95-percent confidence level, and the margin of error is plus or minus 2 percentage points.

The plummeting presidential approval rating appeared to be caused by the increasing public distrust in the government’s Covid-19 control and prevention measures. Despite the monthslong conflict between Justice Minister Choo Mi-ae and Prosecutor General Yoon Seok-youl, as well as skyrocketing housing prices, Moon managed to keep his approval rating above 40 percent until the end of November.

But his numbers have started dropping as the country sees soaring numbers of new Covid-19 infections. On Dec. 1, 511 new cases were reported, but the country saw a record-breaking 1,030 coronavirus cases Saturday midnight, of which 1,002 were domestic infections.

Among those who supported Moon’s performance in the latest Gallup Korea poll, the largest number of people, or 25 percent, said they backed the president for his countermeasures in response to the Covid-19 pandemic.

Since the first week of February, Moon’s Covid-19 control and preventive measures had been the biggest reason for his high approval ratings. In September, 40 percent of those who approved his performance said they did so because of the Covid-19 measures. That percentage, however, dropped into the 30s in October and November. Starting in December, the figure has fallen to the 20s.

In past months, the ruling party and the administration blamed certain groups, such as the controversial Shincheonji Church of Jesus and the Sarang Jeil Church, for triggering clusters of infections and refusing to cooperate with government measures.

Medical experts and opposition politicians, however, attribute the latest surge of infections to the government’s failure to pre-emptively elevate the social distancing level.

Moon also fueled controversy with what was seen as an overly optimistic assessment Wednesday that the country will soon be freed from the pandemic.

During an emergency videoconference meeting to check on the capital region’s readiness, Moon said three times that it won’t be long before the country sees the light at the end of a long tunnel.