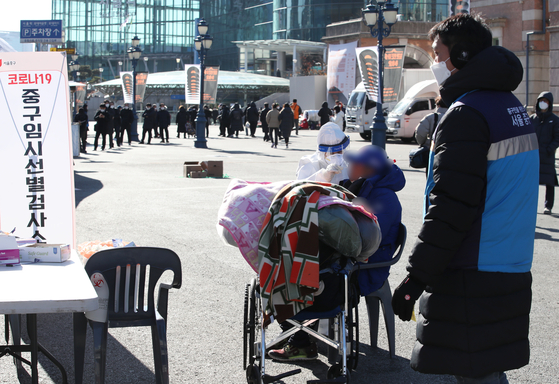 A homeless person receives a Covid-19 test at Seoul Station Square in central Seoul Monday amid the city’s efforts to expand testing. [YONHAP]

Daily Covid-19 cases dropped to 718 Sunday after peaking at an all-time high of 1,030 the day before. The decline, however, did little to relieve local anxieties about surging infections, as health authorities said it was simply a result of fewer tests conducted over the weekend.

A smaller number of people normally get tested on weekends compared to the weekdays because private medical facilities that provide Covid-19 testing usually open only on Saturday mornings and close entirely on Sundays. (Public facilities are normally open throughout the week.)

Jeong Eun-kyeong, commissioner of the Korea Disease Control and Prevention Agency (KDCA), grimly warned in a Monday press briefing that the country could see some 950 to 1,200 new patients in a single day soon, calling the current phase “the biggest threat” in Korea’s months-long battle against the pandemic. 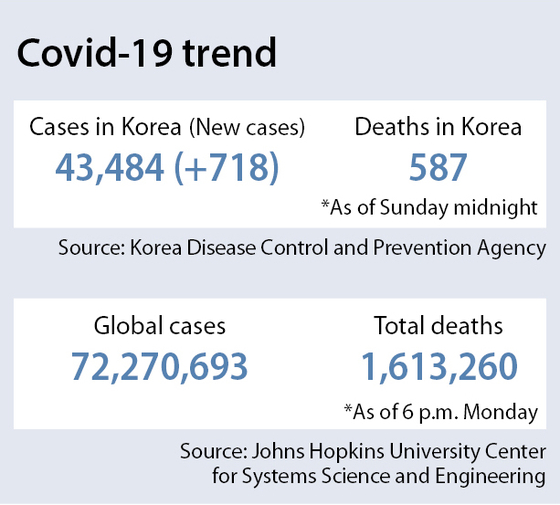 Whether or not the country actually reaches that many cases in a day will heavily rely on “pre-emptive testing” — administering virus tests on people even though they’re not exhibiting any symptoms — epidemiological investigations and the public’s compliance with social distancing measures, Jeong noted.

“It’s very different [now] from what we saw in our first and second waves” of the pandemic, when new cases were mostly from a few major clusters, the KDCA chief said. In recent weeks, patients with mild or no symptoms have been causing numerous chains of infections, spreading the virus wide and deep into people’s everyday lives, she said.

Among Sunday’s total cases, the vast majority were in Seoul and the surrounding province of Gyeonggi — 217 in Seoul and 220 in Gyeonggi. Incheon, which is also part of the greater Seoul area, also known as the Seoul metropolitan area, registered only 36 new cases.

All of Korea’s 17 major cities and provinces added at least one new case Sunday.

The remaining 36 cases were imported — seven each from Russia and Indonesia, six from the United States, four from South Africa, three from Myanmar, two from India and one each from Pakistan, France, the Czech Republic, Canada, Colombia, Tanzania and Nepal.

Seven patients died Sunday, raising total deaths to 587, while 288 people recovered, bringing entire recoveries to 32,102. As of Sunday at midnight, Korea had counted 43,484 coronavirus patients in all. 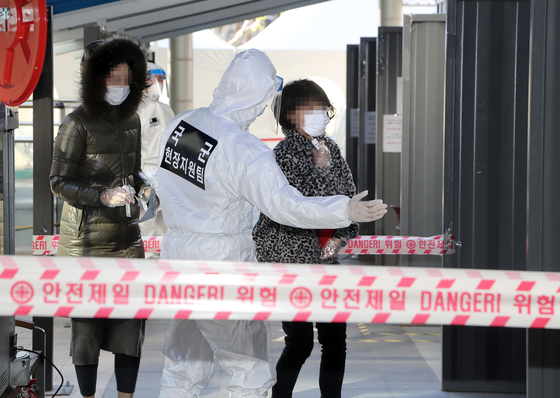 
This week’s daily cases will be the most critical factor for the central government in deciding whether to crank up the whole nation's social distancing level to the highest Level 3.

Restaurants, coffee shops, funeral halls, hotels and motels can remain open, but will face other restrictions.


While health authorities said Monday they were contemplating the imposition of Level 3, the government office chiefs of Seoul, Incheon and Gyeonggi have showed somewhat conflicting views on the need to take that final step.

Gyeonggi Gov. Lee Jae-myung said in a Facebook post Sunday that he had formally asked the central government to immediately raise Gyeonggi’s social distancing level to Level 3 in order to prevent the province from ending up in a worse situation. On Monday, he wrote that his request was rejected and said he would respect the central government’s decision.

Acting Seoul Mayor Seo Jung-hyup has taken a more cautious stance on the issue, saying going into Level 3 was “the very last straw” to take, one that should take into thorough account the wide damage that many businesses would face.

Incheon Mayor Park Nam-choon passed the buck to the central government, saying his office would “keep pace” with whatever decision health authorities make.

In the meantime, the metropolitan government of Busan, Korea’s second largest city, announced Monday it was officially going into Level 2.5 for two weeks starting Tuesday, saying the decision was reached after consultation with the central government and Busan’s district and county offices.

While most recent infections have been coming from a myriad of small clusters, some have been connected to clusters with cases over 100. The fastest-growing cluster in the nation now is in Ulsan, some 300 kilometers (186 miles) south of Seoul.

Ulsan health officials Monday said they detected 47 more Covid-19 patients at Yangji Hospital, a medical facility for older people, raising total infections at the hospital to 205. Of that total figure, 147 people were identified as patients who had been hospitalized there, one doctor, four nurses, 12 nursing assistants, 21 caregivers and four other employees. Some of those infected patients transmitted the virus to 16 others outside the hospital, officials said.

How the virus got into the hospital is still a mystery.

A former caregiver who used to work at the hospital first tested positive on the morning of Dec. 6, prompting others at the hospital to get immediately tested. Officials, however, said they weren’t sure she was the first patient to have actually contracted the virus in the cluster. The former caregiver’s last day at work was Nov. 30.

The entire 10-story hospital has been placed under cohort isolation — the shutting down of a building to prevent the spread of the virus — since Dec. 6, and dozens of people have tested positive while being quarantined inside the building. Health officials said they have yet to find any solid proof that the recently diagnosed patients were infected during quarantine.