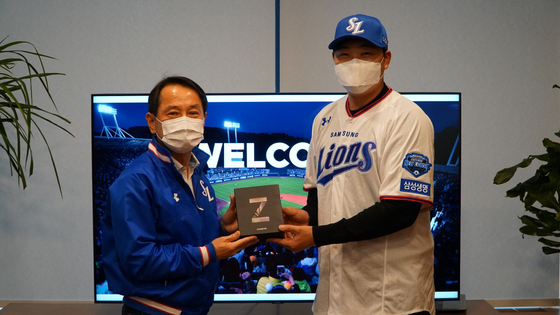 Oh Jae-il, right, poses for a photo after signing his free agent contract with the Samsung Lions on Monday. [SAMSUNG LIONS]

Oh and the Lions agreed to a four-year contract at a maximum of 5 billion won ($4.5 million). Oh’s contract includes 2.4 billion won in signing bonus and 2.2 billion won in annual salary with an option of 400 million won.

Since the free agent market opened up this year, the Lions have been actively pursuing Oh.

“I’m thankful to the Samsung Lions for evaluating me highly,” Oh said after the signing. “I’m very excited to start my new challenge at Samsung Lions Park, where I have great memories. I’ll work hard to meet expectations.”

After graduating from Yatap High School, Oh made his KBO debut with the Hyundai Unicorns back in 2005. After the club was disbanded, Oh played for the Nexen Heroes, now the Kiwoom Heroes, until the 2011 season, before joining the Doosan Bears.

With the Bears, he slowly worked his way up to become the club’s first baseman and a key slugger in the lineup, helping the Bears win the Korean Series in the 2015, 2016 and 2019 seasons.

Although the Bears lost the Korean Series to the NC Dinos this year, Oh still had a solid season, finishing the regular season with a .312 batting average with 147 hits, 16 home runs and 89 RBIs.

He is one of seven of the Bears' free agents this season and the second to sign a contract with another club. Of the seven, the Bears have so far only managed to retain third baseman Heo Kyoung-min, who signed a four-plus-three-year contract at a maximum of 8.5 billion won. The Bears have already lost second baseman Choi Joo-hwan to the SK Wyverns.

Although Oh is leaving the Bears, he didn’t forget to thank the club.