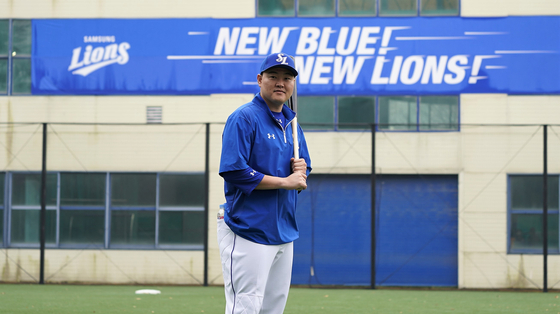 
Oh Jae-il, the newest member of the Samsung Lions den, is hoping to add a lot of extra power to the struggling Daegu club’s batting lineup this season.

The addition of Oh immediately strengthens the Lions batting lineup. The former Doosan Bears slugger is a force to be reckoned with at the plate, although his numbers dipped slightly last season.

Despite a sluggish year, Oh still ended the 2020 season with a 0.312 batting average, 16 home runs and 89 RBIs. For four years from 2016 to 2019, Oh had hit more than 20 homers each season, even though the Bears' home stadium Jamsil does not favor sluggers.

After signing Oh, who became a free agent at the end of 2020 season, Samsung manager Huh Sam-young said, "I received a big gift."


Oh is aware that he joins the Lions with high expectations for both him and his bat.

“I feel a lot of responsibility because [Huh] expects a lot from me," Oh said. "I'm trying to prepare harder than last year and the year before.”


This is the first time that Oh has had to prepare for a new season in Korea, as all KBO clubs hold spring training closer to home to avoid traveling during the coronavirus pandemic.

"There are pros and cons about practicing in Korea," he said. "The good thing is that when you go to overseas training, you have to stay away from your family for nearly two months, and [when you practice in Korea,] you can exercise while staying with your family."

After Oh moved to Samsung after eight years with the Bears, the person he received the most help from was his former Doosan teammate Lee Won-seok, who joined the Lions in 2017.

"It's helpful just by having Won-seok beside me,” Oh said. "It would’ve been awkward because I don’t know many players, but I think I got close quickly thanks to Won-seok."


Samsung's young pitchers, who were especially weak against Oh, are relieved that yesterday's enemy has become today's ally.

The person who welcomed Oh the most in the team was 20-year-old pitcher Won Tae-in, who has struggled against Oh for two years, giving up eight hits and five home runs in 13 at-bats.

"Actually Tae-in didn't say much when we met,” Oh said. “I think it's because there's an age gap. [We filmed a video together and] Tae-in knew exactly where I hit a home run off him.”

For this season, Oh Jae-il is all about staying on track.

"I’m trying to focus on the basics,” Oh said. “And I’m aiming to upgrade my physical strength and power like every year.”

"I want to make people think that Samsung got better than last year,” he said. "I'm not expecting the team to become better suddenly after I do well alone, but I hope the team gets better as much as people are looking forward to.”