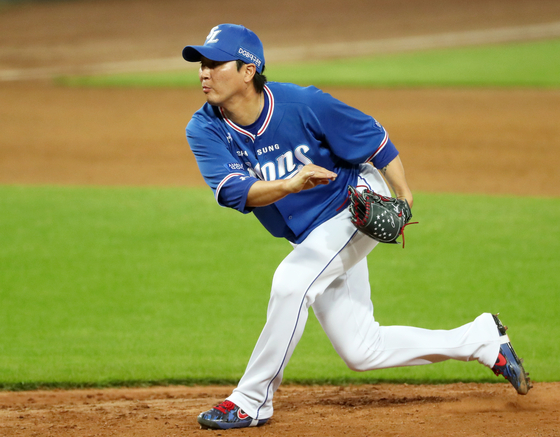 
The Samsung Lions re-signed pitcher Woo Kyu-min on a one-plus-one deal on Thursday.

The Lions announced that they re-signed free agent Woo on a one-plus-one contract, meaning he's guaranteed one year and the club can choose to extend the deal to a second, at a maximum 1 billion won ($923,000) including 200 million won in annual salary and 300 million won in incentives each year.

Thirty-five-year-old Woo was drafted by the LG Twins in the third round in 2003 and joined the squad the following year. He stayed with the Twins, playing as both a starter and bullpen pitcher, for more than a decade, earning free agency for the first time in 2016. Woo joined the Lions that year and will stay with them for at least one more year, likely until retirement.

Samsung have been the most active team in this year's free agent market. They kicked things off by signing infielder Oh Jae-il from the Doosan Bears for a maximum 5 billion won. Oh was considered one of the biggest names on the market this year. Earlier this week, the Lions also re-signed infielder Lee Won-seok for a maximum 2 billion won before bringing back Woo today.

Both Doosan and the SK Wyverns have signed two free agents, although Doosan is by far the biggest spender in the market so far, signing the two biggest contracts to day this year. The Kia Tigers and the Twins have each signed one free agent so far.

The NC Dinos, Kiwoom Heroes, KT Wiz, Lotte Giants and Hanwha Eagles are yet to sign a free agent.