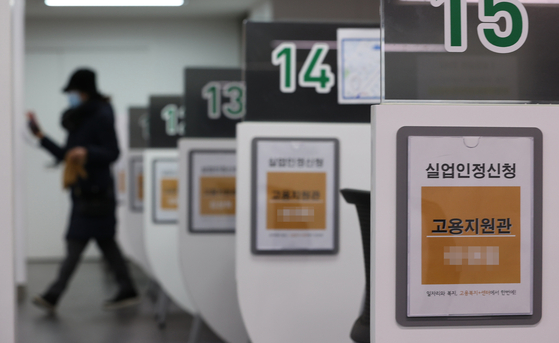 A job welfare center in Seoul where people are applying for unemployment benefits on Wednesday. Job losses continued for nine consecutive months, the second-longest stretch that's now even worse than the last global crisis in 2009. [YONHAP]


The number of employed in Korea has fallen for nine consecutive months, the second longest stretch in more than two decades, even worse than in the wake of the global economic meltdown in 2009 as the coronavirus continues to maul the economy.

Yet Finance Minister Hong Nam-ki tried to see an upside, saying job losses in November were fewer than in October and that the job situation in Korea is “relatively decent” compared to other countries.

According to Statistics Korea on Wednesday, 27.2 million people were employed in Korea in November, 273,000 fewer than a year earlier.

In 2009, job shrinkages continued for eight consecutive months between January and August.

The worst stretch remains 16 consecutive months of shrinking jobs during the Asian economic crisis from January 1998 to April 1999.

The statistic agency noted that November saw the smallest number of job losses since March's 195,000.

November’s figure was better than October's 421,000, which was the highest number of monthly job losses in six months.

The best news came from the public sector.

The public sector added 152,000 jobs, including administrative jobs and jobs in national defense.

The decline in manufacturing jobs, however, expanded in November.

With many jobs available for senior citizens in the public sector, the only age group that continued to see increases in the number of people employed was people aged 60 or older.

People in their 20s saw the largest decline: 209,000 fewer year-on-year. When including teenagers aged 15 or above, who mostly work part-time jobs in restaurants and convenience stores, the figure adds up to 243,000.

People in vulnerable situations including temporary contract workers as well as self-employed continued to suffer.

The statistic agency speculated that the job figures for this month could be worse considering tightened social distancing regulations.

The government raised the social distancing level to Level 2 in the greater Seoul area on Nov. 24. It was further raised to Level 2.5 on Dec. 8.

Yet the number of daily cases is hovering around 1,000.

According to the government, the number of people employed in November when compared to a year ago represented a decline of 1 percent, whereas the United States fell 6 percent year-on-year as of November. As of October, Germany fell 1.3 percent, Japan 1.4 percent and Britain 2.6 percent, it said.