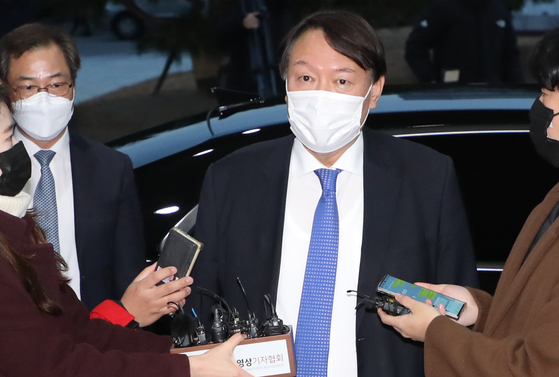 Judge Hong Sun-wuk of the Seoul Administrative Court accepted Yoon’s request for an injunction after a two-part hearing concluded earlier in the day. The order at least temporarily reverses the suspension of Korea's top prosecutor for allegedly breaching his political neutrality and illegally surveilling judges.

Yoon will return to the Supreme Prosecutors’ Office on Friday, one of Yoon’s lawyers said, ending an eight-day absence.

The ruling was announced at around 10 p.m. on Thursday. Presidential spokesman Kang Min-seok said the Blue House had no immediate comment on the court’s decision.

A disciplinary panel within the Ministry of Justice issued a two-month suspension for Yoon on Dec. 16, after finding him guilty on four counts of ethical and legal misconduct. The panel determined that Yoon ordered the illegal surveillance of a judge and violated his duty to maintain political neutrality.

Later in the day, Justice Minister Choo Mi-ae recommended the disciplinary action to President Moon, which he approved. The suspension is largely seen as a continuation of the administration’s previous efforts to get Yoon to step down.

The next day, Yoon filed a motion to seek a court injunction ending the suspension, and also filed a separate lawsuit to reverse the disciplinary action.  Hong said Thursday that the injunction is effective until 30 days after the verdict of that lawsuit, allowing Yoon to remain the country’s top prosecutor while the other legal process plays out.

Hong heard arguments by lawyers representing Yoon and the Justice Ministry beginning Thursday at 3 p.m., picking up from the hearing that began on Tuesday. The second part of the hearing ended at around 4:15 p.m.

Yoon was represented by his three lawyers but did not attend the hearing. The Justice Ministry sent one lawyer to argue its case.

It was the second time that the administrative court granted an injunction to halt Yoon’s suspension. When Justice Minister Choo used her power in November to suspend Yoon without going through a disciplinary process, he won a court injunction from Judge Jo Mi-yeon and returned to his job one week later.