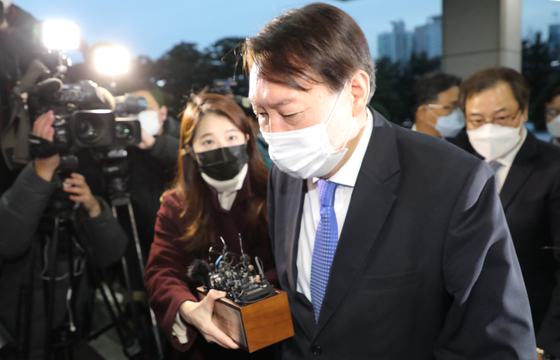 Away from his office for one week, Yoon returned to the Supreme Prosecutors’ Office around 5:10 p.m. “As a public servant of the country, I promise to everyone that I will do my best to protect the spirit of the Constitution and the rule of law,” Yoon told journalists on his return.

On Nov. 24, Choo held a surprise press conference and announced that a Justice Ministry’s internal inspection uncovered six grave charges against Yoon. She immediately suspended him from duty, started a disciplinary process and ordered a criminal probe, prompting speculation that she was trying to dismiss him.

Yoon denied Choo's accusations and stressed that he had never been given a chance to explain his position during the internal inspection. He filed for an injunction from the Seoul Administrative Court and filed a lawsuit to invalidate her orders.

Although the injunction restored Yoon as prosecutor general for the time being, Yoon can be pushed out of office again if the disciplinary committee of the Ministry of Justice, largely controlled by Choo, decides to dismiss him. In that case, Yoon would have to apply for a new injunction and file a different lawsuit to challenge the dismissal.

Since Choo was the petitioner who demanded disciplinary action against Yoon, she won’t chair the committee. Koh was supposed to be the acting chairman, but he tendered his resignation minutes after the Seoul Administrative Court issued the injunction and restored Yoon as prosecutor general.

The ministry said she accepted Koh's resignation and will appoint a successor soon.

Earlier Tuesday, an oversight committee of the ministry also concluded that it was improper for Choo to suspend Yoon and start a disciplinary process against him.

According to the Inspection Committee of the Justice Ministry, seven out of its 11 members attended a meeting and reached a unanimous decision that Choo’s recent series of actions against Yoon were unfair and flawed.

The committee had a discussion for three hours and 15 minutes and reviewed the legitimacy of Choo’s actions. The seven members who attended the meeting all agreed that Choo’s actions were gravely flawed because she failed to inform Yoon of the charges he was facing and did not offer him an opportunity to explain his position.

Six of the seven committee members, including Chairman Kang Dong-bum, a professor of law at Ewha Womans University, were outside experts. Lee Ju-hyung, head of the Uijeongbu District Prosecutors’ Office, was the only inside member.

The committee heard arguments from two inspectors from the Justice Ministry who had carried out an internal probe into Yoon and Yoon’s two lawyers.

Despite the unanimous decision of the oversight committee, it is a nonbinding recommendation. Choo said Tuesday that she will keep in mind the committee’s conclusion, but made clear that she will push forward the disciplinary process against Yoon.

Meanwhile, speculation grew Tuesday that President Moon Jae-in was mulling the possibility of firing both Choo and Yoon to put an end to their war, following political advice from the prime minister.

Moon had an unscheduled meeting with Choo at the Blue house on Tuesday, fueling speculation that he discussed the possibility of her resignation. Moon appointed Choo as justice minister in January and Yoon as the prosecutor general in July 2019. The prosecutor general’s two-year tenure is guaranteed by law, unlike a cabinet minister.

Choo arrived at the Blue House around 11:15 a.m., shortly after Moon hosted a cabinet meeting through a video conference call. It was unclear how long she met with Moon.

Ahead of the cabinet meeting, Choo also had a one-on-one talk with Prime Minister Chung Sye-kyun for about 10 minutes. They met at the government complex building in central Seoul.

“There was, however, no discussion at all about her resignation during her meetings with the president and the prime minister, contrary to some media reports.”

Choo’s meetings with the president and the prime minister took place at a conspicuous time. According to multiple government sources, Prime Minister Chung met with Moon on Monday and recommended that both Choo and Yoon be sacked.

The sources told the JoongAng Ilbo that Chung told Moon that Yoon has become a burden to the administration. “Yoon has brought this situation upon himself, and he can no longer perform his job,” Chung was quoted as telling Moon by a source. “His resignation is unavoidable.”

Another source told the JoongAng Ilbo that Chung proposed to Moon that Choo and Yoon must step down simultaneously as a political way out of the mess. Their conflict has emerged as one of the country’s most divisive political issues, and has put into harsh focus the Moon administration’s drive to curb the powers of the state prosecution agency.

“I have a lot on my mind,” Moon was quoted as replying to Chung.

Later Monday, Moon broke his silence and issued a de facto warning to Yoon and the prosecutors. He said all public servants must serve the interest of the community, not their own private gains. "Even if it is painful and difficult, you will see a new future after reform and innovation by bidding farewell to the old and having a will to change," Moon said, prompting speculation that he was criticizing Yoon and the prosecution.