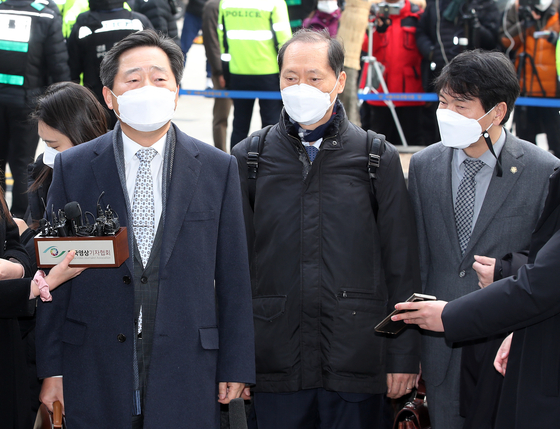 Prosecutor General Yoon Seok-youl's three lawyers stand before the reporters on Tuesday as they enter the Seoul Administrative Court to attend a hearing to seek an injunction to halt the administration's suspension of the top prosecutor. [YONHAP]


The Seoul Administrative Court held the first part of a hearing Tuesday on Prosecutor General Yoon Seok-youl’s request to halt his suspension, which President Moon Jae-in formally signed off on last week.

“The entire disciplinary process of the Justice Ministry, including an internal inspection of Yoon, the formation of the disciplinary panel and its deliberation, is unlawful, unfair and flawed,” Lee Seok-wung, one of Yoon’s lawyers, said before he attended the hearing.

“The disciplinary panel had found Yoon guilty of four charges based on its vague assumption and hypothesis, and we will highlight that,” he said.

The Ministry of Justice’s disciplinary panel issued a two-month suspension for Yoon on Dec. 16, finding him guilty on four counts of ethical and legal misconduct. The panel determined that Yoon ordered the illegal surveillance of a judge and violated his duty to maintain political neutrality.

Later in the evening, President Moon approved the disciplinary action, immediately suspending the prosecutor general. The suspension is largely seen as a continuation of the administration’s previous efforts to get Yoon to step down.

The next day, Yoon filed a motion to seek a court injunction to stop his suspension, and also filed a separate lawsuit to reverse the disciplinary action.

The Seoul Administrative Court began the hearing on the injunction at 2 p.m., with Judge Hong Sun-wuk presiding. Yoon was represented by three lawyers including Lee, but did not attend the hearing. Tuesday's portion of the hearing lasted for two hours and will continue Thursday at 3 p.m.

“Because of the suspension, not only the prosecutor general but also the prosecution and the country suffered irrecoverable damages,” Lee said. “There is an urgent need to halt the suspension as soon as possible, and we will argue to the court that halting the suspension for the time being does not harm public interest.”

The Ministry of Justice also sent a lawyer, Lee Ok-hyung, to the hearing. He did not respond tp questions from reporters before entering the court.

When Justice Minister Choo Mi-ae used her power in November to suspend Yoon without going through a disciplinary process, he won a court injunction and returned to his job one week later. It, however, remains to be seen if the court will lift this suspension.

Meanwhile, Moon faced criticism on Tuesday for inviting heads of the judiciary to the Blue House in the midst of Yoon’s rancorous legal battle. 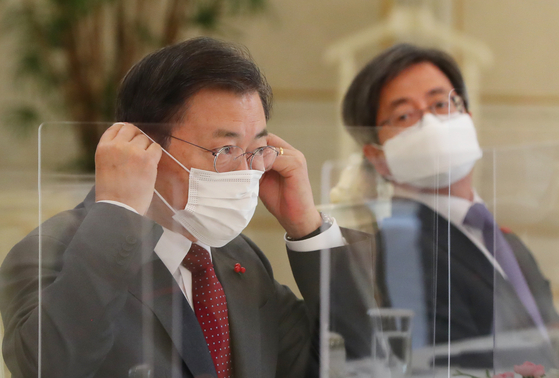 
In his opening remarks, Moon talked about state affairs, including the resistance to his campaign to reform state agencies.

“I believe reform is an opportunity for mature democracy, with checks and balances based on the spirit of the Constitution,” Moon said. “But right now, we are seeing conflict and we face tasks to stabilize the institutional reform. We hope you will pay attention to this issue and work on it.”

Some judges said the meeting was inappropriate, even if it doesn’t affect the injunction hearing, since Yoon is currently involved in a series of legal battles against the Moon administration.

“This meeting is an extremely inappropriate attempt to manage the judiciary within the bureaucratic system,” a senior judge serving in a court in the capital region told the JoongAng Ilbo. “Ahead of an important trial, the president should have deliberately avoided a meeting with the chief justices of the Supreme Court, Constitutional Court and a former Supreme Court justice,” who is leading the NEC.