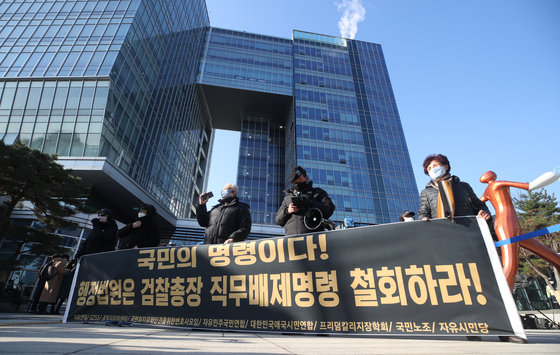 Members of conservative civic groups hold a rally outside the Seoul Administrative Court on Monday, demanding that the court accepts Prosecutor General Yoon Seok-youl's suit challenging Justice Minister Choo Mi-ae's suspension of him from duty. The court held a hearing on Monday and listened to arguments from lawyers of Choo and Yoon. [YONHAP]


Almost all members of the prosecution — from rank-and-file prosecutors to the acting chief — pressed Justice Minister Choo Mi-ae to recant her decision to suspend Prosecutor General Yoon Seok-youl.

"For the sake of the greater cause of completing the reform of the prosecution, you must take a step back," Cho Nam-kwan, deputy head of the Supreme Prosecutors' Office, said Monday in a letter addressed to the justice minister. He posted the letter on the intranet of the prosecution in the morning, asking Choo to withdraw her suspension of Yoon.

In an unprecedented move, Choo suspended Yoon on Nov. 24 and started disciplinary proceedings after accusing him of ethical and criminal violations such as breach of political neutrality and ordering illegal surveillance of a judge assigned to a case involving former Justice Minister Cho Kuk.

Cho Nam-kwan has been acting prosecutor general since Yoon's suspension. Ending his days of silence, Cho joined prosecutors from around the country who have been protesting Choo's action.

Cho wrote that the administration's initiative of prosecutorial reform cannot succeed without the support of 2,100 prosecutors and 8,000 investigators and administrative workers of the prosecution.

He noted that all members of the prosecution ranging from rank-and-file prosecutors to heads of district and high prosecutors' offices have made requests that Choo reconsider her action.

"I am not saying that the prosecutor general was flawless while serving his term, but the majority of the prosecutors including myself are certain that he had not committed illegality or crime heavy enough to be dishonorably kicked out from the post before the end of his tenure," Cho wrote. "We all also agree that the prosecutor general has maintained political neutrality by conducting fair investigations into scandals surrounding members of both past and current administrations based on law and principle."

As of Monday, all 1,789 rank-and-file prosecutors at 59 district offices nationwide signed statements demanding Choo recant her action against Yoon.

Former members of the prosecution as well as some senior officials of the Justice Ministry also pressed Choo to recant her decision.

As the prosecutors' resistance snowballs, President Moon Jae-in on Monday issued a de facto warning to them. 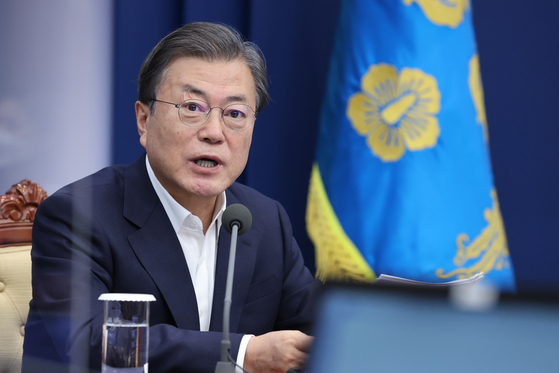 
At a senior secretariat meeting at the Blue House in the afternoon, Moon said, "It is time for public servants to pull themselves together in front of a crisis."

Without mentioning the fight between Choo and Yoon, Moon said all public servants must serve the interest of the community. "If you do not move beyond past practices and culture, you will fall behind the rapid changes of the world," Moon said. "Even if it is painful and difficult, you will see a new future after reform and innovation by bidding farewell to the old and having a will to change."

The remarks represented a break in Moon's days of silence about the war between his top law enforcement officials. When Choo suspended Yoon, Moon was briefed beforehand but made no comment.

Moon's remarks came as the Seoul Administrative Court started its review of the validity of Yoon's suspension. Yoon filed a lawsuit on Wednesday, and the court will ultimately determine whether to accept his suit demanding Choo withdraw her decision to suspend him.

Judge Jo Mi-yeon heard from lawyers of Choo and Yoon on Monday. The closed hearing started around 11 a.m. and ended after an hour. Choo and Yoon did not attend the session.

If the court accepts Yoon's suit, Choo's suspension order will lose its effect for the timing being, and Yoon will immediately return to duty. If the court dismisses the suit, he will remain suspended.