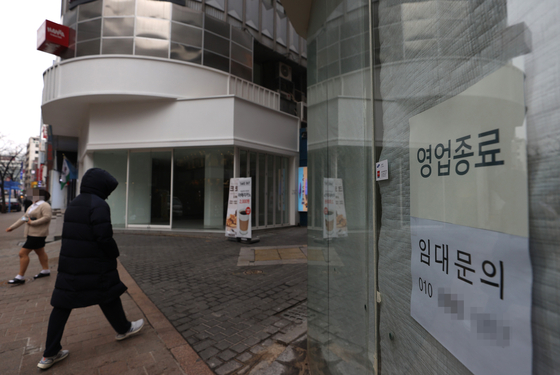 An empty store with the signs that says it is looking for new tenant in Myeong-dong Seoul. The government on Dec. 29 announced of handing out maximum 3 million won to small business owners that are struggling due to the restrictive social distancing. [YONHAP]

The government will spend 9.3 trillion won ($8.5 billion) on the third round of emergency coronavirus relief grants, giving up to 3 million won in cash to businesses forced to shut down and 1 million won to people with insecure jobs such as freelancers.

The spending that starts Jan. 11 is triple the initial 3 trillion won that was earmarked for grants in next year’s budget.

Finance Minister Hong Nam-ki described the 9.3-trillion-won emergency package as the equivalent of a fifth supplementary budget. The government has passed four supplementary budgets this year to address economic woes brought on by the coronavirus pandemic.

In September, the National Assembly approved a 7.8-trillion-won fourth supplementary budget that funded a second round of emergency relief grants for small businesses affected by the social distancing restrictions. They were given a maximum of up to 2 million won while vulnerable categories of workers like freelancers and door-to-door salespersons received up to 1.5 million won.

“The people that will benefit will number 5.8 million,” Hong said Tuesday during a press briefing.

Hong said time is of the essence and the government will make sure 90 percent of the support will be paid before the Lunar New Year holiday in February.

Of the 9.3 trillion won, 83 percent, or 7.7 trillion won, will be directly funded by the government while the balance will come in indirect support such as loan guarantees.

Some 3 trillion won comes from next year’s budget, while 4.8 trillion won will be paid through the government’s contingency budget, and 500 billion won through the repurposing of government funds such as the National Sports Promotional Fund and the Tourism Promotion and Development Fund.

A total of 4.1 trillion won will be spent on cash handouts to small businesses and 500 billion won for people with insecure jobs.

The small businesses must have seen their operations limited or banned by the government under social distancing restrictions. Businesses with annual revenues less than 400 million won that have suffered sales declines also qualify.

Some 2.8 million business owners will be receiving relief grants.

All will get 1 million won in basic grants. Businesses that were forced to limit the number of customers entering their shops will be given an additional 1 million won. Those that had to shut down, such as noraebang (singing rooms) or indoor gyms, will receive an additional 2 million won.

The government has also raised incentives to landlords who lower rents.

A 50-percent tax deduction on the lowered rents will be extended for another six months. Landlords whose total income is less than 100 million won including rents can benefit from more tax deductions.

Rent has become a major issue as stores saw sharp declines in sales or were forced to close.

The government will also offer 1 trillion won in loans with interest rates of 1.9 percent to 100,000 business owners who were forced to shut due to social distancing guidelines.

For businesses forced to limit their operations, the government will offer 3 trillion won worth of loans at interest rates between 2 and 4 percent. Some 300,000 businesses will be eligible.

The government has decided to suspend electricity and gas bills for small businesses for three months while also suspending payments on employment insurance and workers’ compensation insurance for three months.

Some 650,000 people who already received relief grants from the fourth supplementary budget will receive 500,000 won immediately without having to go through a new application process.

“The government has decided to distribute the third emergency relief grants amounting to 9.3 trillion won quickly to protect the lives of the people facing a crisis,” President Moon Jae-in said during the last cabinet meeting of the year on Tuesday. “It is a supportive measure that is customized to protect small businesses and people with job insecurity...As it is urgent, we will execute [the relief grants] in early January.”

Finance Minister Hong, however, stressed that the government is not considering another supplementary budget, which would have to be financed by debt.

The government estimates the total national debt will reach a record 846.9 trillion won by the end of the year, a 21-percent increase year-on-year.