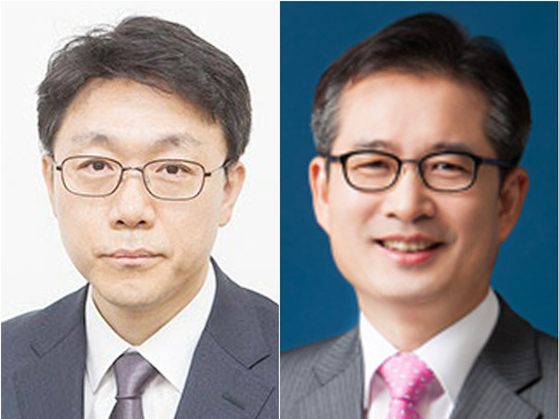 Kim Jin-wook, left, and Lee Kun-ree were selected Monday by a nomination panel as finalists to become the first head of the Corruption Investigation Office for high-ranking public officials. President Moon Jae-in will chose one of them. [YONHAP]

President Moon Jae-in will choose between Kim Jin-wook and Lee Kun-ree as the first head of the Corruption Investigation Office for high-ranking officials (CIO), following the panel’s recommendation.

The seven-member nomination panel held a meeting at the National Assembly on Monday to decide their recommendations.

“We held two votes, and Kim and Lee, both recommended by the Korean Bar association, were selected as candidates to head the CIO,” a press release from the panel said. “Based on the National Assembly’s rules, the panel will report the selections to the speaker and then send a written recommendation report to President Moon.”

Moon is expected to make his pick before the end of this year, according to a senior government official.

The ruling Democratic Party (DP) used its majority on Dec. 30, 2019 to pass a law establishing the CIO. The law took effect July 15 and preparations to launch the agency continued, but the opposition party delayed the process to appoint its leader. Eventually, the law was amended to give the DP greater power to appoint the leader.

On Monday, two members on the seven-member nomination panel, appointed by the opposition People Power Party (PPP), walked out of the vote to select the candidates. The remaining five members continued the meeting and selected Kim and Lee as finalists.

Kim, 54, is a former judge. He is currently a senior researcher for the Constitutional Court. Lee is a 57-year-old former prosecutor. He is currently the vice chairman of the state-run Anti-Corruption and Civil Rights Commission.

The five panel members who participated in the selection were Cho Jae-youn, a Supreme Court justice and the minister of National Court Administration; Justice Minister Choo Mi-ae; Lee Chan-hee, president of the Korean Bar Association; and two law experts appointed by the DP. Although Choo said she was stepping down earlier this month, she still participated in the decision-making process, as Moon has not accepted her resignation. 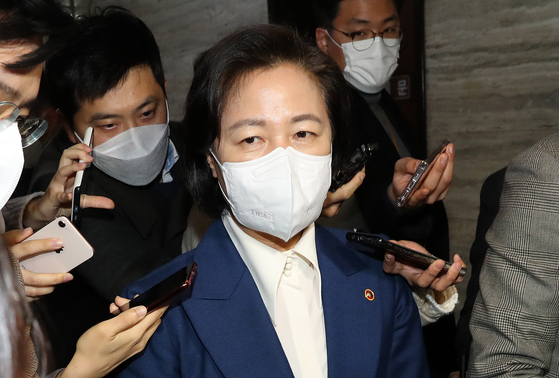 During the first round, two votes were cast by each member, and Kim was selected as the first candidate. The five panelists cast one vote each in the second round, and Lee was selected.

The DP said both Kim and Lee are capable of heading the CIO.

“The nominations were made belatedly, but still it is fortunate that the panel decided on the finalists before the end of this year,” DP Chairman Lee Nak-yon said Monday.

Rep. Choi In-ho, spokesman for the DP, said both Kim and Lee are known for their impartiality and neutrality, and both were recommended by the Korean Bar Association.

The party will do its best to smoothly operate the confirmation hearing process, Choi said, adding, “We will do our best to launch the CIO in January."

The PPP said the selection was made without proper vetting of the candidates and it does not condone the decision.

“Kim has no experience in investigations,” said Rep. Bae June-young, spokesman of the PPP. “And Lee is currently serving at a vice-ministerial post in this administration. He is, by any means, a DP choice.”

After Moon chooses between Kim and Lee, the nominee will go through a confirmation hearing, although the legislature’s approval is not required for the appointment. The head of the new agency will serve a three-year term.

The agency has the power to indict prosecutors, precluding the prosecution from being able to protect its own members from criminal charges.