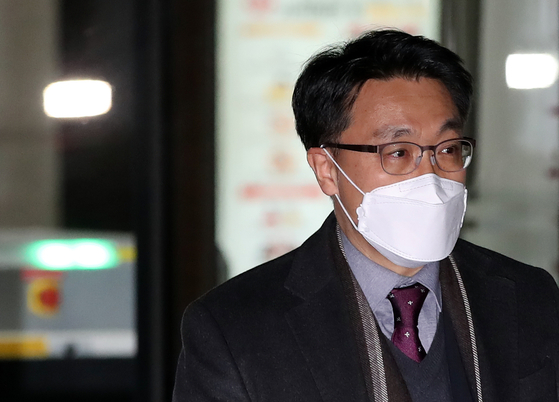 Kim Jin-wook, a researcher at the Constitutional Court and President Moon Jae-in's nominee to head the Corruption Investigation Office for High-ranking Officials, leaves the court after work on Dec. 30, 2020. [YONHAP]

Kim, nominated by President Moon Jae-in in December to head the Corruption Investigation Office for High-ranking Officials, was a visiting scholar at the University of California, Berkeley, in 2015, according to PPP Rep. Yoo Sang-bum, and the period overlapped with Kim’s childcare leave.

Kim, an employee of the Constitutional Court, took childcare leave during the second half of 2015. He has two sons.

According to the law governing public servants, performing an activity other than taking care of children during childcare leave is cause for disciplinary action.

Kim’s employment file submitted to Rep. Yoo showed that Kim has worked as a researcher for the Constitutional Court since Feb. 1, 2010.

Kim’s employment record showed that he took childcare leave from July 1, 2015 to Dec. 31, 2015, and the PPP questioned whether Kim continued his professional training in the United States using the childcare leave.

The JoongAng Ilbo inquired from the University of California, Berkeley, about Kim’s training in 2015, and the school replied that Kim had spent one full year in 2015 as a visiting scholar, meaning that Kim spent the six months of childcare leave at the university.

According to the law, civil servants are ordered to terminate their leaves and return to their jobs and undergo a disciplinary process if they use their leaves for reasons other than stated purposes. In 2015, the National Police Agency punished 27 out of 32 police officers who took childcare leaves and studied at law school.

The PPP also raised the question of whether Kim received a monthly subsidy during his childcare leave. According to the law, a public servant receives 70 percent of his or her salary during childcare leave.

“If Kim abused the system and used his childcare leave for study abroad, it is a clear violation of the law,” Rep. Yoo said.

The National Assembly has yet to fix a schedule for his confirmation hearing. Speculation is high the non-binding hearing will take place next week.

A native of Daegu, Kim, 54, earned his bachelor’s degree from Seoul National University, majoring in archaeology and art history. He received his master’s degree in law and then studied at Harvard Law School.

He passed the bar exam in Korea in 1989 and started his career as a judge in 1995. He left the judiciary in 1998 to work for Korea’s largest law firm, Kim & Chang, for 12 years. Since 2010, Kim has served as a researcher at the Constitutional Court. He served in multiple key posts in the court, including chief of staff for the chief justice.