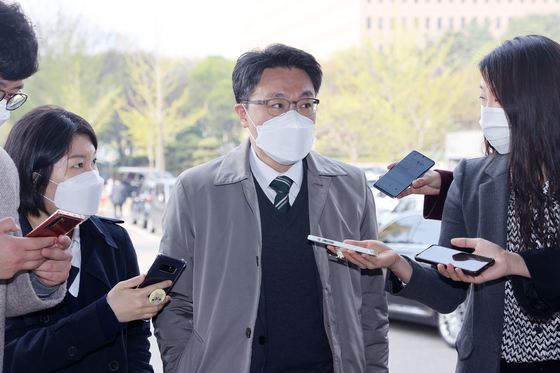 
The head of the investigation agency for high-ranking officials on Thursday denied having hired a ruling party politician’s son as an aide without a proper employment process.

Kim Jin-wook, the head of the Corruption Investigation Office for High-ranking Officials (CIO), hired an executive assistant as soon as the office was formally launched on Jan. 21, 2021. The aide, a young lawyer, is in charge of managing Kim’s schedules and assisting him with various assignments.

Sources in the legal community told the JoongAng Ilbo that a young lawyer was recommended to Kim by the Korean Bar Association. The recruitment was made without any public job offering notice.

The post is categorized as an “extraordinary civil service” grade 5 job position available for applicants who are not career public servants. Korea’s officialdom is classified by nine grades, with grade 1 being the highest.

The assistant’s father is also a lawyer. The father is a Hanyang University Law School alumni of former Justice Minister Choo Mi-ae. He made a failed bid in the DP’s primary for the local election to win the candidacy for Ulju County of Ulsan Metropolitan Government.

When the Korean Bar Association recommended the young lawyer as an assistant to the CIO head Kim, it was headed by Lee Chan-hee. Lee headed the lobby group until February 2021.

The prosecution started a probe to look into a possibility that the hiring was rigged. A civic group recently filed a criminal petition to the Anyang Branch of the Suwon District Prosecutors’ Office to investigate Kim on charges of abusing his power to award a job.

Kim sent a text message to reporters on Thursday to make public some details of the hiring. He said he had little time to hire an assistant after he was nominated by President Moon Jae-in on Dec. 30 as the CIO head and then formally appointed. He then received a recommendation from the Korean Bar Association to hire the assistant.

“Other government agencies’ heads often hire relatives or people they knew from school as assistants, but I received the Korean Bar Association’s recommendation in order to avoid such practice,” he wrote.

The Korean Bar Association claimed Thursday that it had never recommended the assistant to Kim, saying there was no record of such a recommendation.

“It may be possible that the former president had done so personally, but the association has no record,” Kim Dae-gwang, secretary general of the Korean Bar Association, told the JoongAng Ilbo Thursday.