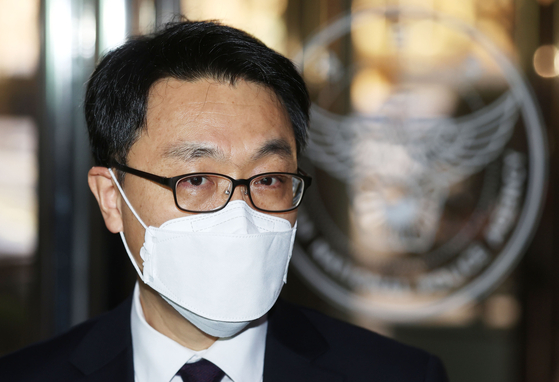 
The head of the new investigation agency for senior public officials dismissed criticism that he met with the national police chief despite being a suspect in an ongoing investigation.

"There was no mention at all about my case," Kim Jin-wook, head of the Corruption Investigation Office for High-ranking Officials (CIO), said Tuesday after meeting Commissioner General Kim Chang-yong of the National Police Agency. "We just talked about overall cooperation."

Many criticized Kim Jin-wook for meeting the police commissioner general, as the Seoul Metropolitan Police Agency recently started a probe into whether he had broken the antigraft law in 2017 while serving as a judge.

According to the civic group, Kim, while working as a researcher of the Constitutional Court in 2017, participated in a third-party paid-in capital increase for a Kosdaq-listed company and earned 4.76 million won ($4,300).

"No public servant shall accept, request or promise to receive any money or goods exceeding 1 million won at a time or 3 million won in a fiscal year from the same person, regardless of any connection to his or her duties and regardless of any pretext such as donation, sponsorship, gift and others," the law said.

Spec Watch Korea said Kim may have also violated the Financial Investment Services and Capital Market Act if he made the investment through insider trading based on nonpublic information.

The Supreme Prosecutors' Office sent the case to the police for investigation. Recently, the case was assigned to the Anti-corruption Department of the Seoul Metropolitan Police Agency.

Kim said Tuesday that he had scheduled the meeting with the police chief weeks in advance, before the the probe was launched.

He also said the National Investigation Headquarters, launched on Jan. 1 as part of the Moon administration's massive project to reorganize the police, has jurisdiction over his case, and Police Commissioner General Kim has no power to command a specific probe.

Spec Watch Korea, however, disagreed. Its head, Yoon Young-dae, held a press conference outside the National Police Agency on Tuesday and said Kim's meeting with the police chief amounts to an abuse of power and obstruction of justice.

After their meeting, CIO Chief Kim said they talked about checks and balances among investigative agencies: "We discussed how to cooperate and how to keep one another in check among the prosecution, police, CIO and National Investigation Headquarters and how to reorganize the scope of operations."

He also stressed that the discussion was about basic principles. "We did not discuss any specific case," Kim said.

On Friday, Kim told media that the police handed over a case involving a high-ranking official to the CIO for a probe.

The CIO is a key part of President Moon's ambitious campaign to weaken the powers of the prosecution. It has jurisdiction over 6,500 senior officials, including the president and his or her immediate relatives; senior presidential aides; the National Assembly speaker and lawmakers; the Supreme Court chief justice and judges; the Constitutional Court chief justice and judges; the prime minister, ministers and vice ministers; the prosecutor general and prosecutors; mayors, governors and education office chiefs; and senior police and military officers.

It is also the first state agency to be granted the authority to indict suspects, a power that until now has been solely held by the prosecution. The agency has the power to indict some top officials as well as prosecutors, precluding the prosecution from shielding its own members from criminal charges.

Kim, a former judge, took office on Jan. 21 to start a three-year tenure as the first head of the CIO. He started public activity by visiting the National Cemetery on Jan. 25. He visited the National Assembly on Jan. 26, met with the head of the Korea Bar Association on Jan. 27 and Supreme Court Chief Justice Kim Myeong-su on Jan. 29.

He met with Prosecutor General Yoon Seok-youl on Feb. 8 and Justice Minister Park Beom-kye the day after.