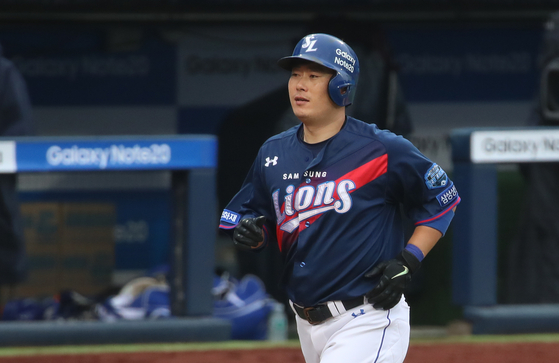 Samsung Lions' Lee Won-seok rounds the bases after hitting a solo home run against the NC Dinos on Sept. 6. [YONHAP]


The Samsung Lions re-signed infielder Lee Won-seok on a two-plus-one deal on Tuesday.

The Lions announced that they re-signed free agent Lee on a two-plus-one contract, meaning he's guaranteed two years and the club can choose to extend the deal to a third, at a maximum 2 billion won ($1.8 million) including a 300-million-won signing bonus, 300 million won in annual salary and 800 million won in incentives.

Thirty-four-year-old Lee was drafted by the Lotte Giants in the 2005 draft and has consistently played in the KBO since his debut, except during his mandatory military service. Lee was traded to the Doosan Bears ahead of the 2009 season and played at Jamsil until 2016, when he earned free agency and signed with the Lions.

Lee's signing ends nearly two weeks of silence in the KBO free agent market. After Doosan's Jung Soo-bin re-signed with the club on Dec. 16, there have been no further moves in the market. Lee is the eighth free agent to sign a deal this year, with 15 still unsigned.