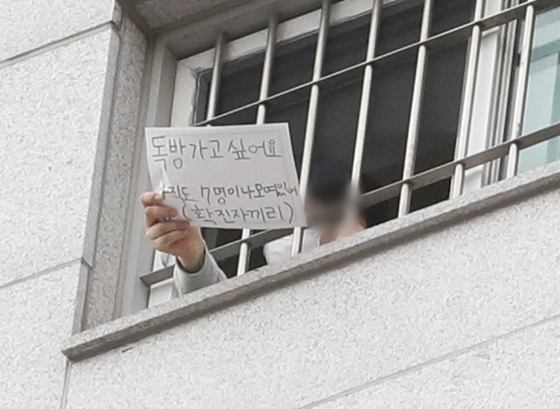 An inmate at Seoul Dongbu Detention Center in Songpa District, southern Seoul, holds a sign Sunday that reads, “I want a room to myself. Seven confirmed patients are still gathered [in a single room].” More than 1,100 coronavirus cases have been traced to the facility. [NEWS1]

Korea registered 824 new cases last Friday on New Year’s Day, markedly fewer than most recent days when the nation was seeing over 1,000 cases. Health officials, however, barely celebrated the decline, noting it was the result of fewer tests conducted over the weekend and holidays.

With daily cases still showing no signs of drastically falling, the central government announced Saturday that current social distancing measures will be extended for two more weeks until Jan. 17.

Health authorities Saturday said the central government decided not to go to the highest Level 3 yet because it deemed the country’s medical system was capable of handling the influx of new patients. Fear that any more restrictions would critically hurt local business owners was another major reason why the central government chose to stay at the current level, officials said. 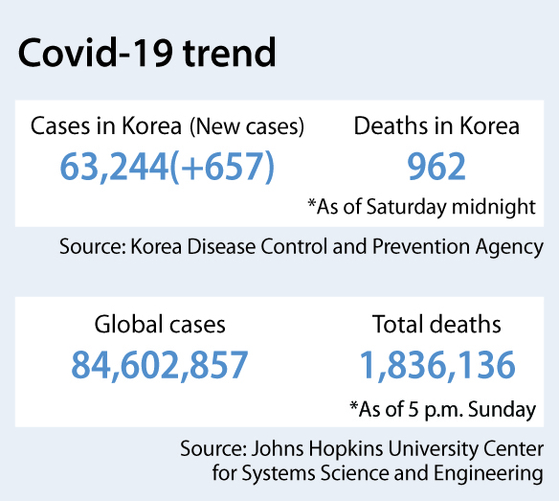 But not all rules will be the same. A few will be strengthened, while some others will be loosened.

Starting Monday, any social gatherings of five people or more will be banned nationwide. This rule had been applied to only those living in the greater Seoul area.

Outdoor winter sports facilities including ski resorts and sleigh parks, which had been closed, will be allowed to reopen, but must close every day from 9 p.m. to 5 a.m. and limit the number of customers allowed at a time to one-third of capacity.

Private cram schools, or hagwon, in the greater Seoul area can reopen for in-person learning under the condition there are nine people or fewer in the facility, or if the classes are specifically catered to students preparing to enter college this spring.

Health Minister Kwon Deok-cheol urged the public to cancel all nonessential outings, saying the country was just starting to see some “slow but concrete” positive changes.

Among 657 people who were newly diagnosed with the coronavirus Saturday, 641 were due to domestic transmissions, according to data from the Korea Disease Control and Prevention Agency (KDCA). There were 201 cases detected in Gyeonggi, 195 in Seoul, 48 in Incheon, 33 in Gangwon, 26 each in Gwangju and North Chungcheong, 21 in Daegu, 19 in Busan, 14 in North Gyeongsang, 12 each in South Jeolla and South Gyeongsang, nine in South Chungcheong, eight in Daejeon, seven in Ulsan, five in North Jeolla, four on Jeju Island and one in Sejong City.

The remaining 16 cases were imported — four from Mexico, three each from the United States and Indonesia, two from Poland and one each from Russia, Pakistan, Hungary and Sweden.

Twenty patients died, raising total deaths to 962, while 929 patients recovered, bringing total recoveries to 44,507. As of Saturday at midnight, Korea had counted 63,244 Covid-19 patients in all.

The cluster at the Seoul Dongbu Detention Center in Songpa District, southern Seoul, added at least 120 more infections over the weekend to reach 1,108 patients in total.

Health authorities Saturday said they’ve also detected four more cases of the coronavirus variant now sweeping through Europe after it was first discovered in England last September, bringing total cases of the variant in Korea to nine. All nine patients have been identified as Korean nationals who recently came from Britain.

The first case of a variant spreading through South Africa has also been found in Korea from a person who arrived in Korea on Dec. 26.

Both variants are known to be more transmissible.