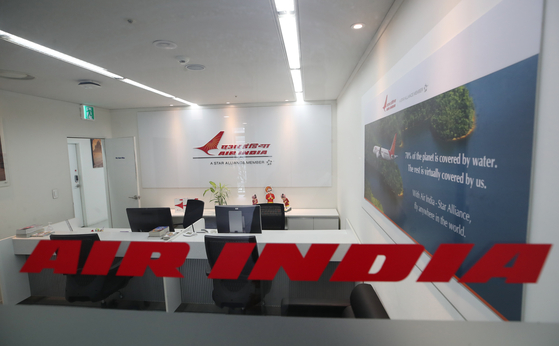 This photo, taken on Tuesday, shows the deserted Korean office of India's airline, Air India. The government said on the same day it will allow the operation of flights from coronavirus-ravaged India for the safe return of Korean citizens. Regular flights between Korea and India were suspended in March last year over coronavirus concerns. Only non-scheduled flights had been operated between the two countries until Saturday. [YONHAP]


Korea plans to provide support to India, including oxygen concentrators and Covid-19 diagnostic kits, as the country is experiencing the world's worst Covid-19 outbreaks with more than 350,000 daily new infections.

“The government has decided to provide India with items for quarantine and public health from a humanitarian and friendly standpoint," Foreign Ministry spokesman Choi Young-sam said in a regular briefing Tuesday.

The specific amount of aid was not mentioned, but is reportedly worth millions of dollars.

Choi also explained that the government is reviewing various ways to support Korean residents currently in the virus-hit country, including lifting the ban on Indian flights.

Authorities had announced Saturday that they will ban non-scheduled flights coming from India, along with regular flights.

The move caused chaos among the Korean community in India, and the government clarified that they will make exceptions to allow flights with Korean residents.

“There are concerns that even non-scheduled flights to carry Korean citizens back home may be suspended, but that is not true,” Choi said.

“In cooperation with the related sectors of the two countries, the government will take necessary measures for the safe return of our citizens,” he added.

Health authorities said they are not considering isolating Koreans coming from India in a separate quarantine facility.

Meanwhile, all arrivals from South Africa and Tanzania have been required to stay at state-designated shelters for 14 days upon entry into Korea, as of last Thursday.

"We are taking such measures because we believe that the South African virus mutant is perilous," said Sohn Young-rae, a senior health official of the Central Disaster and Safety Countermeasure Headquarters, during the Tuesday briefing.

“We aren’t applying that to Koreans coming from India, and are instead letting them quarantine in their home like people coming from other high-risk countries [where virus variants have been found.]”

He added that they will conduct two polymerase chain reaction (PCR) tests during the quarantine period and strengthen monitoring of the home-quarantines.

According to the Ministry of Foreign Affairs, about 10,000 Koreans are currently residing in India.

Among them, 114 people were reported to have tested positive for the coronavirus, including some 10 people working in the Korean Embassy. The figure is likely to be more, as it only includes people who have reported to the embassy.