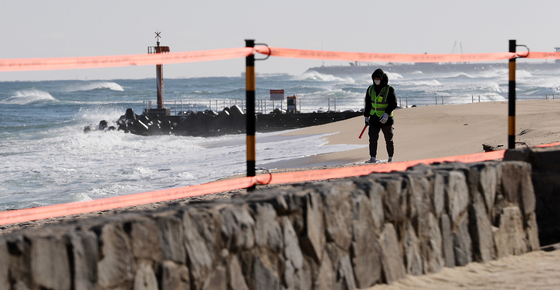 Gyeongmun Beach in Gangreung, Gangwon, is blocked off from entry due to Covid-19. Authorities are cordoning off all areas that tourists like to visit to see the New Year sunrise on Friday. [NEWS1]


Prisons across the country will be put under Level 3 restrictions after a cluster at the Seoul Dongbu Detention Center grew to 792 Covid-19 cases.


In a press briefing Thursday, Vice Justice Minister Lee Yong-gu apologized to the public for the failure to contain the infections.

Lee attributed the unchecked spread of the virus in prisons to “limitations” unique to such facilities, such as a lack of ventilation, crowding and a failure to anticipate asymptomatic contagion.

He said all correctional facilities across the country will be placed under the highest possible social distancing rules effective immediately for the next two weeks.

This means inmates will be exempt from work duties as well as education programs, while all visits by outsiders will be prohibited for two weeks. Meetings with legal counsels will be allowed on restricted terms to reduce external contact, Lee said.

In addition, inmates at all prisons will receive three face masks a week. Until now, the ministry had only given out masks in prisons with confirmed cases due to the cost.

Inmates at the Dongbu Detention Center who tested negative for the virus have been moved to different penitentiaries across the country in order to reduce the oversaturation at the prison.

But the Seoul Detention Center in Uiwang, Gyeonggi, also appears to be exposed to growing contagion, with one of its inmates dying due to complications of the virus on Thursday.

The victim was in his 30s and had pre-existing medical problems, according to prison officials. His death follows that of a 66-year-old inmate at the Seoul Dongbu Detention Center who succumbed to the virus on Sunday.

Prisons may not be the only places in Korea subject to restrictions tantamount to a lockdown.

With cases nationwide surging by around a thousand a day, health authorities say they will make another change to Korea’s social distancing level before Jan. 2, a day before current Level 2.5 measures were supposed to end.

While the least that could happen is another extension of Level 2.5 measures in the greater Seoul area by a week or more, there is also a chance officials may finally move to the highest Level 3 — the closest Korea would come to a national lockdown.

The announcement came amid reports from the Korea Disease Control and Prevention Agency (KDCA) Thursday that 967 new Covid-19 cases were discovered a day before, down from the 1,050 found Tuesday. 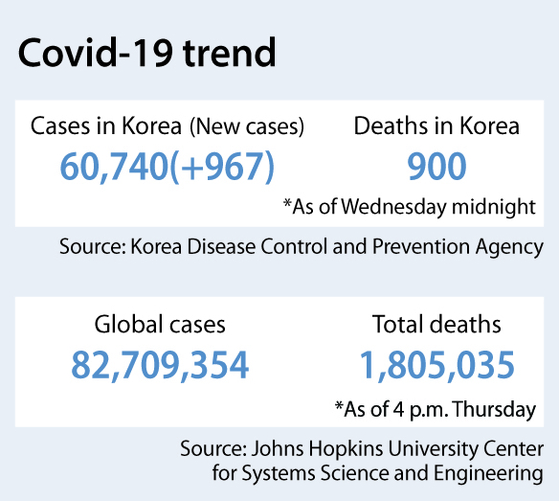 Fluctuations in daily caseloads over the past week indicate the contagion is far from being tamed despite three weeks of heightened social distancing at Level 2.5, the penultimate tier of the government’s five-level alert scheme.

Officials have been reluctant to go to Level 3, fearing the impact on an estimated 2 million additional businesses.

Under that measure, all non-essential businesses, which include shopping malls, cram schools, theaters, hair salons, internet cafes and wedding halls, will be forced to close.

Restaurants will only be allowed to serve one customer per 8 square meters (86 square feet) of space, vastly reducing their clientele, in addition to the Level 2.5 measures already in place, which mandate take-out and deliveries only after 9 p.m.

Only supermarkets selling food and necessities, convenience stores, and small shops like bakeries would be exempt from closure orders.

According to the KCDA Thursday, 940 of the 967 new infections occurred domestically, with over two-thirds occurring in Seoul, Gyeonggi and Incheon. These put Korea’s total caseload at 60,740.

An additional 21 fatalities from the virus were reported Thursday. Of the 900 deaths caused by the virus in Korea, 374 of them — or 41.5 percent — occurred in this month.

The mortality rate from the virus, which has slowly crept up from 1.38 percent on Dec. 21 to 1.48 percent on Thursday, is likely to increase further due to the high number of elderly patients in serious condition, according to Yoon Tae-ho, the spokesperson for the Central Disaster Management Headquarters on Wednesday.

As of Thursday, the total number of patients classified as being in serious condition reached a record number of 344. 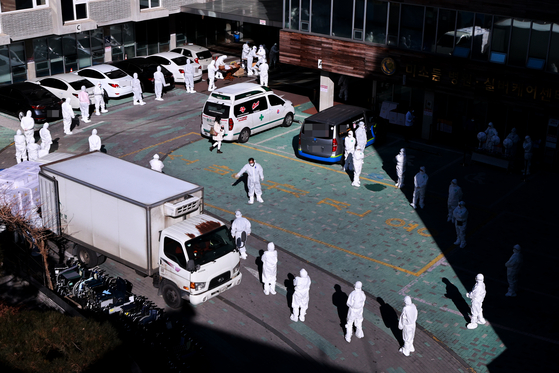 Employees at a hospital in Guro District, western Seoul, stand in line to be tested for Covid-19 on Wednesday. The hospital is home to one of the largest clusters in the country, producing close to 200 infections. [YONHAP]


Along with prisons, health care centers and hospitals catering to the elderly — which have recurrently emerged as hot spots for the virus throughout the year — continue to produce serial mass infections.

One such facility in Guro District, western Seoul, has been connected with 190 infections so far, while others in Goyang, Gyeonggi, and in Sunchang County, North Jeolla, have produced 105 and 76 cases.

In many of these facilities, Covid-19 patients are not the only victims. The attention placed on treating coronavirus cases has meant fewer resources for non-infected patients interred at these hospitals. According to one worker at a medical center in Guro District who talked to the JoongAng Ilbo, 10 non-Covid patients have died at the hospital over the past two weeks, as opposed to seven virus-related fatalities.

Though a causal connection remains unproven, the worker claimed before the hospital was put into cohort quarantine — meaning its sealing off from the outside due to a mass infection — there were only one or two non-Covid deaths daily.