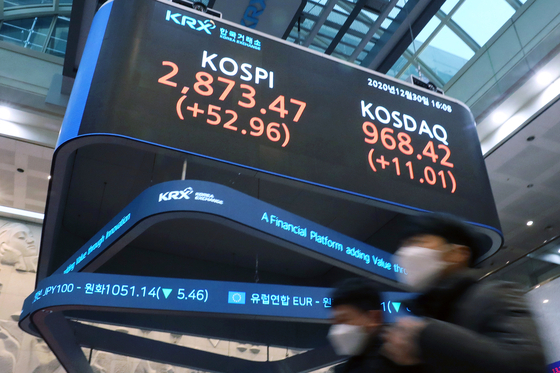 Last year’s stock market was surprisingly bullish largely thanks to retail investors’ buying spree and abundant liquidity, but this year could be even better, experts say, as the Kospi could pass 3,000.

Confidence in the Kospi grew toward the end of the year as the index repeatedly broke its own record highs even as the global coronavirus pandemic raged on, with its latest record being 2,873.47, recorded on Dec. 30.

The index did plunge in March to as low as 1,457.64 during the first wave of the pandemic, but the main bourse managed a V-shape rebound through the year's end.

Shinhan Investment projects that the benchmark index could rise as high as 3,200 this year. Daishin Securities set its Kospi target at 3,080. Hanwha Investment & Securities predicted a target band of between 2,100 and 3,000. Among foreign investment banks, J.P. Morgan also set its upper band for the Kospi at 3,200.

The big reason for the rosy outlook is that recovery in the global economy will lead to an increase in exports for local companies and thus improve their earnings.

“Recovery in the global manufacturing industry has led to an increase in exports for markets including Korea,” said Lee Kyoung-min, an analyst from Daishin Securities. “It is essentially why I’m expecting the Kospi to be strong in 2021.”

J.P. Morgan has also cited expectations on Korean companies’ earnings improving as a major driver for its optimistic projection in its report last month.

Major trade agencies and economic research institutes have forecast exports to grow by up to 8 percent this year.

The Korea Trade-Investment Promotion Agency (Kotra) expects exports to be around $550 billion this year, growing by about 7 percent on year. The Korea International Trade Association (KITA) forecast 6-percent growth while the Korea Development Institute forecast 7.1 percent.

Global demand for chips is expected to grow as social distancing measures under the Covid-19 pandemic have increased the need for digital transformation of workspaces, such as faster internet and high-performing digital devices.

Demand for electric car batteries is also expected to be strong on the back of global governments' push toward a greener economy.

"Considering the Korean economy is export-oriented, it is likely to pick up pace in growth relatively faster than others when the global economy revives," said Jang Geun-hyuk, a research fellow at the Korea Capital Market Institute.


Retail investors still in the game

Retail investors emerged as saviors of the main bourse last year, as they stopped the index from plummeting by picking up stocks offloaded by foreign investors.

With low interest rates making bank savings unattractive and the government tightening real estate policies, many retail investors jumped into the stock market and continued to buy despite the ongoing pandemic.

According to data from the Korea Exchange, retail investors net purchased 63.9 trillion won ($58.8 billion) worth of stocks this year as of Dec. 30, while all other investors net sold.

"Net purchasing from retail investors is likely to decrease this year as foreign investors increase investments. However, increased liquidity from a larger pool of investors could keep the local stock market resilient," Jang said.

Lee Jeong-hwan, an economics and finance professor at Hanyang University, said he expects retail investors are likely to still play a big role in the local stock market.

"I think from the retail investors' point of view there is no reason to reduce their investments for now since we are experiencing very low interest rates," Lee said. "There is still abundant liquidity out there and it needs to go somewhere."

One of the major investment opportunities for retail investors this year is to purchase stocks through public offerings.

This year, multiple companies valued at over a trillion won are expected to go public, including LG Energy Solution, Krafton, KakaoBank and SK Bioscience.

KakaoBank is the internet-only banking arm of Kakao, preparing for an IPO alongside other affiliates KakaoPay and Kakao Page.

Drugmaker SK Bioscience has been making headlines recently as it manufactures AstraZeneca's Covid-19 vaccines under a consignment deal.

Retail investors, however, need to be careful if they are looking for quick gains.

An overheated IPO market can often lead to high volatility in company stocks after listing, like in the case of idol group BTS producer Big Hit Entertainment.

Shares of Big Hit nosedived by about 30.62 percent from the first day's closing price of 258,000 won to 179,000 won in a matter of four trading days. By the 12th day, its shares further dropped to 142,000 won. While the price is still higher than the public offering price of 135,000 won, many small investors who bought on the first day of listing chasing gains ended up as huge losers. The entertainment company has never recovered to over 200,000 won since its second day of listing.

"A lot of retail investors were impatient...because most of them weren't able to buy during the public offering under the current IPO system," Jang said. "They rushed to buy stocks on the first day as it hit its peak...but they now know the risk of chasing shares that rise abruptly."

Despite the rosy outlook and plenty of investment opportunities, projections can become useless if another wave of Covid-19 or its variants, like the already spreading British variant, paralyzes international trade and further limits face-to-face service sectors.

Bank of Korea Gov. Lee Ju-yeol said in his online year-end press briefing that the bank expects exports to grow this year with semiconductors being the main driver. However, it really depends on how fast the Covid-19 crisis is settled.

"The latest resurgence of the virus has raised uncertainties in our projections compared to the previous month," Gov. Lee said, as daily Covid-19 cases hover around 1,000.

"Uncertainties from the virus will remain this year and it'd be too early to expect the global economic cycle to return to its full normalcy right away," a research team from SK Securities said in its report. "The global economy is currently experiencing unprecedented expansionary policies and a delay in restructuring."

"This year, the boost to the stock market was largely powered by increased liquidity from low interest rates, not necessarily improved fundamentals of companies, like their operating profits," Prof. Lee said. "This could be a risk for the stock market this year. Further growth [of the index] will depend on how fast the global economy picks up growth and how well companies manage to strengthen their fundamentals."