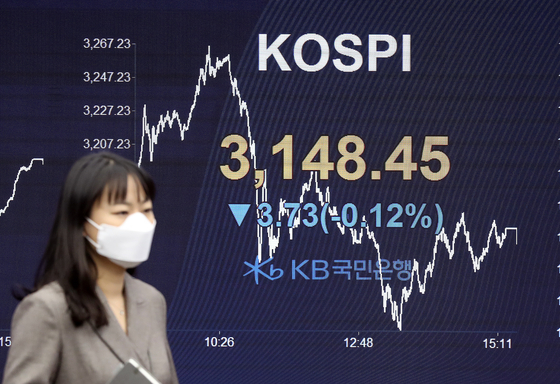 
Stocks fell Monday after choppy trading, roiled by foreign and institutional investors who sought to take profits before their stock options expire later this week. The won fell against the dollar.

Trading volume was exceptionally high at about 1.7 billion shares worth some 44.1 trillion won ($40.2 billion), with losers outnumbering gainers 712 to 170.

Analysts attributed the fall to a massive selling spree by institutions, which raked in local stocks for the year-end dividends last year and are apparently seeking to cash in profits ahead of the option expiration day on Thursday.

"Since the ex-dividend day, they have been cashing in these assets, which affected the Kospi's performance Monday," he added.

Samsung Electronics advanced 2.48 percent to record 91,000 won, following reports that it is competing with Taiwan Semiconductor Manufacturing over a chip outsourcing deal offered by Intel.

The local currency closed at 1,097.3 won against the dollar, up 7.5 won from the previous session's close.