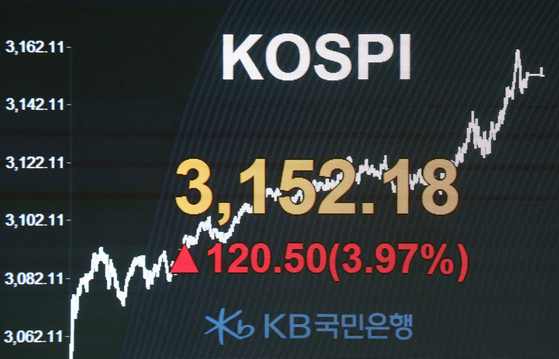 
At the end of 2020, investors were seriously wondering if the Kospi index could really break the 3,000-mark this year. It did it within three trading days.

Within five trading days the Kospi had broken 3,100, and the question became: "When will this bullish rally end?"

On Friday, Seoul's benchmark index closed at 3,152.18, up 3.97 percent from the previous day, breaking the 3,100-mark for the first time in history. The record came just a day after the market closed over 3,000 and two days after it past 3,000 in trading for the first time.

Yet despite the lofty heights already scaled this year, market experts mostly agree that the index still has room to grow.


No end in sight

The frequently cited drivers of the recent boost have been abundant liquidity, a recovery in exports and corporate earnings and an ongoing buying spree from retail investors.

So far, all these factors remain intact.

The Bank of Korea announced at the end of 2020 that it will maintain an expansionary monetary policy for now, considering the coronavirus pandemic is yet to end. In the United States, the incoming Joe Biden administration is also expected to go with an expansionary policy to invigorate the economy.

Exports hit a record high in December, growing by 12.6 year-on-year to $51.4 billion, according to data from the Ministry of Trade, Industry and Energy, empowering expectations of a recovery in Korea's export-oriented economy.

As for earnings of major exporters, results will be released through the end of this month. Analysts' projections on chipmakers, battery makers, carmakers and biopharmaceutical companies have mostly been positive.

Samsung Electronics posted a 29.46 percent increase in annual operating profits at 35.95 trillion won ($32.93 billion) last year, according to its guidance report released Friday. By quarterly earnings, its operating profit grew by 25.7 percent on-year to 9 trillion won in the latest quarter.

While the fourth quarter result fell compared to the earnings surprise recorded in the third quarter of 2020, Kim Yang-jae, a researcher at KTB Investment & Securities, said the company's earnings will likely continue to grow this year considering market demand for chips and the company's efforts in cost cutting.

Retail investors, who championed the index last year, remain a strong buying force in this year's stock market as well.


"I think retail investors' presence in the local stock market will continue to grow," said Lee Jeong-hwan, an economics and finance professor at Hanyang University. "With strict real estate policies, it is hard for them to find alternative investment options."

"The speed is quite fast, but for now there is no special event to limit growth of the index," said Lee Jae-sun, an analyst at Hana Investment & Securities.


Financial market experts say that Korea's major businesses have benefited from the pandemic and a global push to pursue green growth.

Samsung Electronics has been the major leader of the Kospi that grew roughly 30 percent over November and December last year. The company's shares skyrocketed by 40 percent over the same period. Its share price jumped to over 80,000 won per share for the first time ever, pulling up its market capitalization to over 500 trillion won last week. The electronics company alone accounts for some 24 percent of the Kospi market.

"Samsung Electronics' influence in the local stock market is very big, and this company, along with SK hynix, is growing fast backed by growing demand for chips," said Jang Geun-hyuk, a researcher from the Korea Capital Market Institute. "Korean companies' competitive edge in other popular sectors like battery and pharmaceutical has also helped growth [of the index]."

When the Kospi passed the 1,000-mark for the first time on March 31, 1989, Samsung Electronics was seventh by market capitalization and the major players were steelmaker Pohang Iron & Steel Company, now Posco, and banks.

The companies in the top market cap list on the main bourse had changed by July 2007, when the Kospi broke 2,000. Many banks had left the top 10 list and instead energy and heavy industries companies like Korea Electric Power Corporation and Hyundai Heavy Industries emerged as market leaders.

However, due to the global financial crisis in 2008, the Kospi plunged again until carmakers, chemical companies and oil refiners reinvigorated the market to recover to the 2,000-level in the 2010s.

Korea's stock market was then locked into what became known as the boxpi, with the index moving between 2,000 and 2,200 for several years.

Right now, the top 10 players in the market have been completely changed to include battery maker Samsung SDI, biopharmaceutical companies Samsung Biologics and Celltrion as well as tech giants Naver and Kakao.

With them, the market is flying after a temporary slump in March during the first wave of the Covid-19 pandemic that pulled the index down to below 1,500.

Major drivers, however, could become risks if not handled properly.

For instance, while record low interest rates have increased liquidity in the market and pulled up stock prices, printed money is not directly related to an increase in the real economy. Inflation rates still remain far below the central bank's proposed target of 2 percent. In November, consumer prices inched up by only 0.5 percent on year, according to figures from the Bank of Korea (BOK).

"In the past, we could look forward to a so-called wealth effect when asset prices soar, but now people are saving [money] against market uncertainties," said BOK Gov. Lee Ju-yeol during a year-end press briefing.

Lee added that the gap between asset prices and the real economy has led to serious financial inequality and sluggish economic recovery.

"The recent index rise has been led by liquidity rather than fundamentals like companies' operating profits, so there is a risk of the index falling, though it's not expected to be a plunge," said Prof. Lee Jeong-hwan.

Prof. Lee also said the resumption of short sales could bring a change to the market, potentially posing difficulties to retail investors.

The ban on short selling was announced by the Financial Supervisory Service on March 13 last year.

In short selling, shares are borrowed and then sold immediately, on the hope they can be bought again at a lower price to repay the stock loan.

While short sales effectively eliminate bubbles if the market is overheated, for retail investors who are less aware of financial information, they could trigger huge losses.

Retail investors claim the system should be banned for good to level the playing field between them and institutional and foreign investors, but the ban is likely to be removed in March. As short selling bets on share prices falling, it could deal a blow to the market.

With multiple statistics suggesting Koreans have been borrowing to invest in stocks, individual investors' losses could lead to an economic downturn for the country.