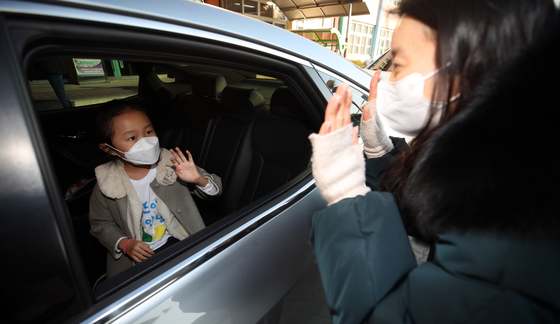 A first grader at Jeongpyeong Elementary School in Gyeongsan, North Gyeongsang, meets her teacher for the first time Monday during a drive-thru orientation organized by the school to prevent the spread of the coronavirus. [YONHAP]

Daily coronavirus cases bounced back to 1,020 Sunday, up from 657 cases the day before, as the New Year holidays came to an end.

Health authorities Monday warned that over one-fourth of people getting diagnosed with the virus recently represented untraceable cases, which means epidemiologists don’t know how or where they contracted the disease, heightening the risk of inadvertent transmission.

Jeong Eun-kyeong, commissioner of the Korea Disease Control and Prevention Agency (KDCA), said in a Monday press briefing that Korea’s third wave of the pandemic was “slightly” slowing down, though risks of new clusters and the spread of coronavirus variants still loom.

One piece of good news is that drug maker AstraZeneca, which is headquartered in Cambridge, England, filed for approval of its Covid-19 vaccine Monday, and the Korean government began review work. Health officials said their goal was to finish review within 40 days so the drug could be approved and distributed as quickly as possible. 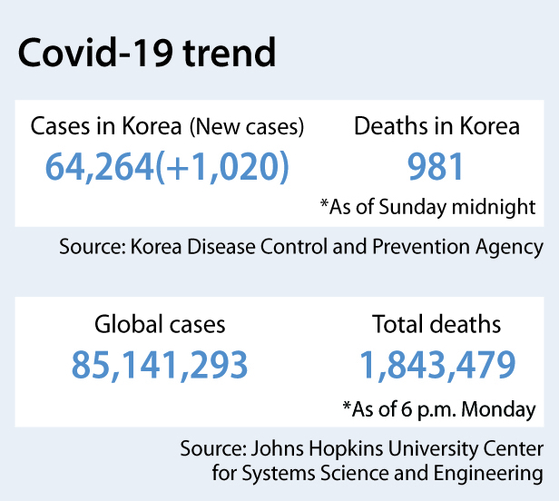 If everything goes as planned, Jeong said, the vaccines would first go to workers and patients in hospitals for the elderly and nursing homes starting from late March. A list of the first people to be vaccinated is currently being drafted, she added.

Clusters popping up in prisons have also been a major problem.

A cluster at Seoul Dongbu Detention Center in Songpa District, southern Seoul, added 121 more infections on Sunday alone, raising the total number of cases to 1,084. Of that figure, 1,041 have been identified as inmates and 22 as workers.

The Ministry of Justice said Monday that a staffer at the Jeju Correctional Institution, a prison, tested positive earlier that morning. The patient, who was infected by a relative, was described as not having had any contact with inmates. Nine of the worker’s colleagues were quarantined Monday as they waited for test results.

The Justice Ministry said all 645 inmates and 235 workers at the Jeju prison would soon be tested in case any other infections had gone unnoticed.

Out of 1,020 people who were diagnosed with the virus Sunday, 985 were due to domestic transmission, according to KDCA data.

All 17 major cities and provinces added new cases except for Sejong City.

The remaining 35 cases were imported — 13 from the United States, seven from Indonesia, three from Canada, two each from India and Russia and one each from Myanmar, Japan, Pakistan, Greece, Germany, Mexico, Brazil and Tanzania.

Nineteen patients died, raising total deaths to 981, while 733 patients recovered, bringing total recoveries to 45,240. As of Sunday at midnight, Korea had counted 64,264 coronavirus patients in all.