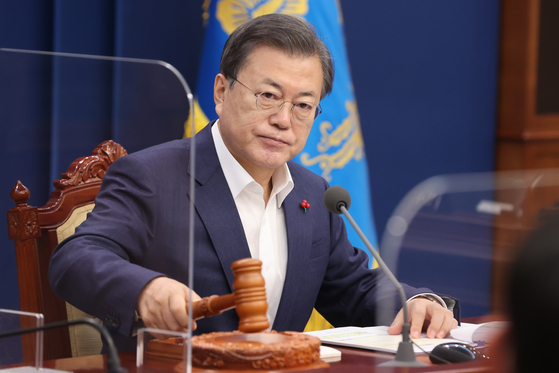 President Moon Jae-in declares the opening of a cabinet meeting on Tuesday at the Blue House. [YONHAP]


Ahead of major by-elections in April, top politicians in the ruling party are floating the idea of another round of Covid-19 relief checks for all households, even before the current round to small businesses is distributed.

President Moon Jae-in on Tuesday held a cabinet meeting and approved the spending of 9.3 trillion won ($9.02 billion) to pay the third round. Some 5.8 million people whose businesses have been hurt by social distancing measures, such as the self-employed and freelancers, will receive checks or loans.

Payments are scheduled to begin next Monday, but top politicians, particularly those considered presidential contenders from the Democratic Party (DP), are already starting to push for another round, the fourth. They want checks given to all citizens.

In an interview with KBS on Monday, DP Chairman Lee Nak-yon said the party can consider a plan to offer a fourth round of relief payments to all people once the pandemic subsides. “When we tell the people to consume amid a rapid spread of infections, it may harm our control and prevention measures,” Lee said. “The appropriate time will be when infections dwindle.” 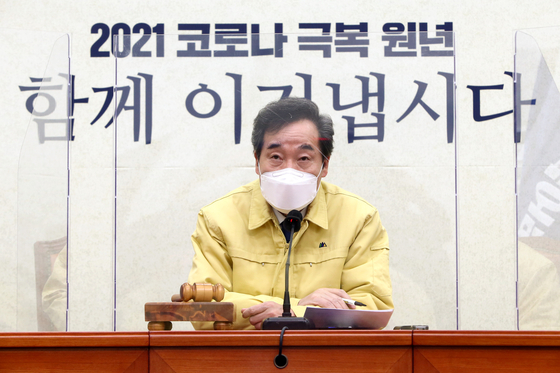 
In previous media interviews marking the New Year holiday, Lee floated the idea of another round. “I don’t think [the third round] is enough,” he told Newsis on Dec. 31. “Those who received help won’t be able to survive for long. We need to hurry and consider another supplementary budget.”

The Moon administration has left open the possibility of more relief.

“Fiscal stability is only meaningful when the people are still making ends meet,” Prime Minister Chung Sye-kyun said in an interview with the Dong-A Ilbo on Sunday. “I believe the government must act if necessary.”

He explored the possibility further on Monday in an interview with MBC. “The entire nation is suffering. Separate from offering help to people suffering from losses due to the pandemic, the overall economy must be boosted. If necessary, we need to spend to stimulate the economy,” he said.

Although it seems appropriate to offer relief to the people most in need, Chung said the Covid-19 pandemic is a special situation. “Under this pandemic, many have suffered losses,” he said. “We will have to implement policies while carefully assessing the situation.”

Gyeonggi Gov. Lee Jae-myung, also a member of the DP, sent letters to all 300 National Assembly lawmakers on Monday urging another round of relief funds for everyone. 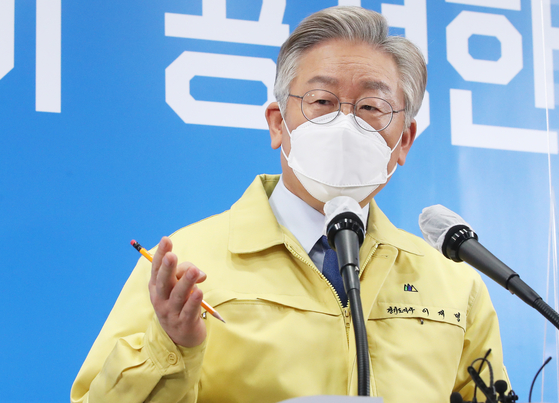 Gyeonggi Gov. Lee Jae-myung announces the elevated social distancing measures for the province on Dec. 21, 2020 during a media conference at the provincial government building. [YONHAP]


“Offering assistance to target groups is necessary, but that is just an emergency measure,” he wrote. “It will be like pouring water into a broken jar. In order to maximize the effect of fiscal spending and boost economic recovery, we need an expansionary policy. To this end, we need to set aside political differences.”

He wrote that an additional round should be given to all households, like the initial round, but even bigger. He proposed that the payments could be given in local consumption vouchers.

In March 2020, Moon announced a plan to give the first round of Covid-19 emergency relief checks to 70 percent of the country’s households. On the eve of the April general elections, the DP pressured the government to change the plan to pay cash to all families.

The DP scored a landslide victory in that election, winning 180 seats in the National Assembly. In May, the government spent more than 14 trillion won ($11.8 billion) in checks to all households.

In September, the National Assembly approved a 7.8-trillion-won supplementary budget that funded a second round of emergency relief grants for small businesses affected by social distancing restrictions.

The legislature passed the third round in December, and the cabinet endorsed it Tuesday.

The main opposition People Power Party (PPP) accused the ruling party and administration of trying to buy votes in the upcoming by-elections.

“This is a dirty trick,” Rep. Lee Jong-bae, chief policymaker of the PPP, said Tuesday. “We all know that they enjoyed a great benefit from the relief payments in the general elections. Just 90 days before Seoul and Busan's mayoral elections, they start proposing more relief payments, making another attempt to buy votes.”

It remains to be seen if the Finance Ministry will support the plan. The ministry has estimated that Korea’s debt-to-GDP ratio would grow to 43.5 percent at the end of 2020, up from 38.1 percent in 2019.