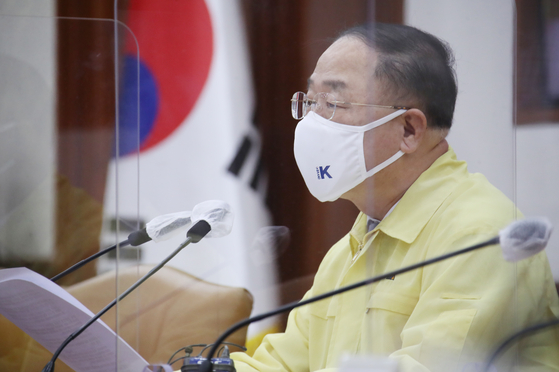 
Finance Minister Hong Nam-ki said Thursday the government will include spending at as many businesses as possible when calculating its planned card cash-back program, which is due to kick off in October.

The government has earmarked 700 billion won ($597 million) for the cash-back program, which is separate from emergency relief grants, to encourage spending on credit and debit cards.

Under the cash-back program, card users are supposed to get 10 percent back for spending beyond 103 percent of their average spending in the second quarter of this year.

Originally, the program was supposed to run from August through October, but its start was delayed to October. The program is only likely to run for October and November.

But it still hasn't been decided where people can spend to get the cash-back benefits.


"We are planning to include card spending at as many businesses as possible," Hong said during a government meeting held Thursday at the central government complex in Seoul, "including non face-to-face transactions."

The final list of places government will recognize will be disclosed after the Chuseok holiday, according to Hong.

On Thursday, Financial Services Commission (FSC) Chairman Koh Seung-beom met with the heads of local financial associations including the Korea Federation of Banks and reaffirmed that the financial institutions will extend debt maturities for another six months for small businesses struggling with the pandemic. The extended maturity ends in March 2022.

The FSC said in a statement Thursday that the amount of rolled over loans is currently at a "manageable level."