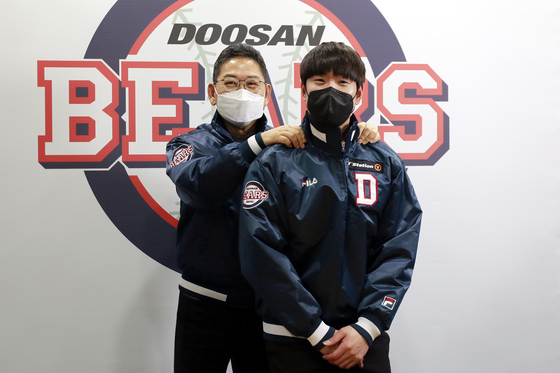 Kim Jae-ho, right, takes a commemorative photo after re-signing with the Doosan Bears on Friday. [YONHAP]


The Doosan Bears have re-signed infielder Kim Jae-ho on a three-year deal, giving the Seoul club a stable presence at the center of its infield despite an unusually high number of players earning free agency this offseason.

The Bears announced Friday that they re-signed free agent Kim on a three-year contract at a maximum 2.5 billion won ($2.3 million) including a 900-million-won signing bonus and 1.6 billion won in salary.

Kim is the fifth Doosan free agent to sign a contract this offseason and the third to return to the club. Third baseman Heo Kyoung-min signed a four-year deal with the Bears in December, followed by outfielder Jung Soo-bin on a six-year deal.

Second baseman Choi Joo-hwan and first baseman Oh Jae-il have both accepted offers from other clubs — Choi has moved to the SK Wyverns and Oh to the Samsung Lions.

Kim was drafted by the Bears in the first round of the rookie draft in 2004. He debuted that season, appearing in 36 games.  Although Kim made regular appearances in the KBO, it wasn't until 2014 that he became a starting fixture in the squad, appearing in 122 games that year.