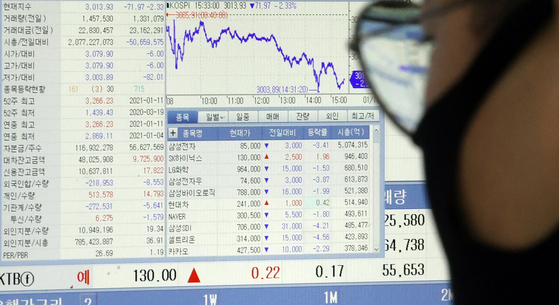 A display at the headquarters of Hana Bank in central Seoul shows the stocks of Samsung Electronics and other key affiliates plunging on Monday after the court sentenced Samsung Electronics Vice Chairman Lee Jae-yong to two years and six months in prison. [YONHAP]


The imprisonment of Samsung Electronics Vice Chairman Lee Jae-yong will likely impact the group's investments and entry into new businesses due to the absence of the de facto leader, according to major business lobbying groups.

The two-and-a-half year prison sentence came at a time when Lee was expected to show more concrete leadership following the death of his father Lee Kun-hee last year.

“The ruling is feared to hurt the overall Korean economy as well as one specific group, considering the outsized influence it has,” said Bae Sang-geun, executive director at the Federation of Korean Industries, in a statement.

“The prolonged absence of a leader will impede the decision-making process required for entering new businesses, which will leave [Samsung] behind the global competition."

Samsung Electronics refrained from releasing a statement regarding the ruling, but a spokesperson told the Korea JoongAng Daily that the company feels “distressed.”

Many industry insiders were particularly concerned about the sentence impacting two fields: A planned massive investment in semiconductors and mergers and acquisitions.

To become the top player in the foundry and processing chips segments, Samsung Electronics pledged to invest 133 trillion won ($120 billion) by 2030.

For this year alone, Samsung is expected to shell out around 12 trillion won to build facilities, and that amount could be adjusted due to the leadership vacuum.

Taiwan’s TSMC, the world’s biggest foundry company, has announced a record investment of up to $28 billion this year into advanced chip facilities.

“Faced with unprecedented uncertainties caused by the coronavirus pandemic, the absence of a leader at Korea’s biggest company will delay important business decisions and investments, which in turn will damage the general economy and business [in Korea],” said the Korea Enterprises Federation in a statement.

Another source from a major conglomerate, who requested anonymity, said that large-scale deals would not be possible while Lee was behind bars.

“It would be hard to expect a major merger or acquisition for the time being at Samsung, because it requires the involvement of a key leader,” the source said.

Samsung Electronics’ last buyout was an acquisition of American audio and automotive company Harman back in 2017.

Business lobbying groups issued statements over the weekend, asking the top court to be lenient in its decision, but to no avail.

The Korea Federation of SMEs issued a statement Sunday asking for the court to be merciful, while on Friday, Park Yong-maan, chairman of the Korea Chamber of Commerce & Industry (KCCI), filed a petition appealing for the amicable management of Lee’s case.