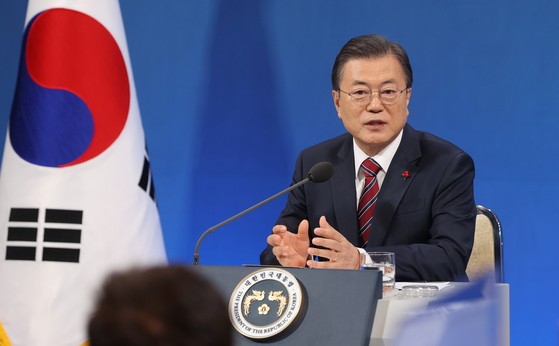 
President Moon Jae-in said Monday that it is premature to grant pardons to his two predecessors.

“It is extremely unfortunate that my two predecessors are both in prison,” Moon said during a New Year’s press conference Monday morning. “They are both aged and their health conditions are poor, so I am very worried about them. But I do not think the timing is right to talk about granting pardons. Their trials have just ended.”

Ousted President Park Geun-hye's trial ended last week, when the Supreme Court upheld her convictions for abuse of power, taking bribes and misappropriating funds from the country's spy agency and ordered her to serve 20 years in prison. Her predecessor, Lee Myung-bak, is also serving a prison term, after the Supreme Court upheld a 17-year prison sentence convicting Lee of embezzlement and taking bribes in October 2020.

“They were found guilty of abuse of power and corruption, and the country suffered enormous damages due to their crimes,” Moon said. “The people were also hurt severely. The court, therefore, handed down heavy sentences, taking into account the graveness of their crimes. Although I am the president, I have no right to talk about granting pardons to them as soon as their trials are over.”

Moon’s remarks put an end to the recent speculations in the political arena that he will soon grant pardons to Lee and Park.

Lee Nak-yon, chairman of the ruling Democratic Party (DP), said earlier this month that he will make such a proposal to Moon for the sake of national unity, and political observers said the move was intended to win conservative votes ahead of the by-elections in April.

At the press conference, Moon still left open the possibility that he will consider granting pardons to Lee and Park.

“An appropriate time will come someday for me to think more seriously,” Moon said. “But the grand precondition is the people’s consensus. Unless the people agree with it, granting special pardons will not bring about national unity. If there will be disagreement, it will actually hurt the national unity.”