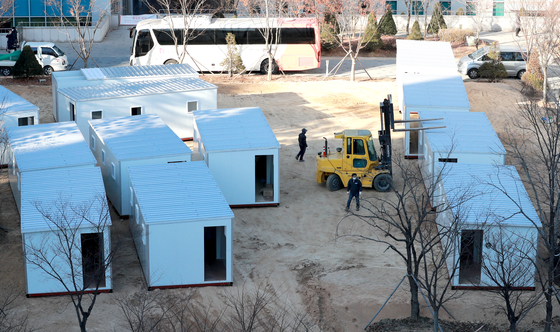 Workers set up shipping containers at the Seoul Medical Center in Jungnang District, eastern Seoul, Tuesday, to be used as Covid-19 treatment centers for patients with minor symptoms. [NEWS1]

But when they will be administered to the public was not revealed.

The news came as Korea added 594 new cases of the coronavirus Monday, a bit fewer than Sunday’s 615 cases and Saturday’s 631. Seoul alone detected 212 cases Monday, while Gyeonggi registered 146, according to data from the Korea Disease Control and Prevention Agency (KDCA).

Minister of Health and Welfare Park Neung-hoo announced in a press briefing Tuesday that the Korean government has agreed to purchase 20 million shots each from AstraZeneca, Pfizer and Moderna, as well as 4 million shots from Janssen, which is a division of Johnson & Johnson.

The assumption is that two shots of the AstraZeneca, Pfizer and Moderna vaccines will be needed for each course of treatment. The Janssen vaccine will only need a single shot.

Vaccines for 10 million more people will separately be sourced through the Covax Facility, a global Covid-19 vaccine allocation plan co-led by the World Health Organization, the Coalition for Epidemic Preparedness Innovations and Gavi. 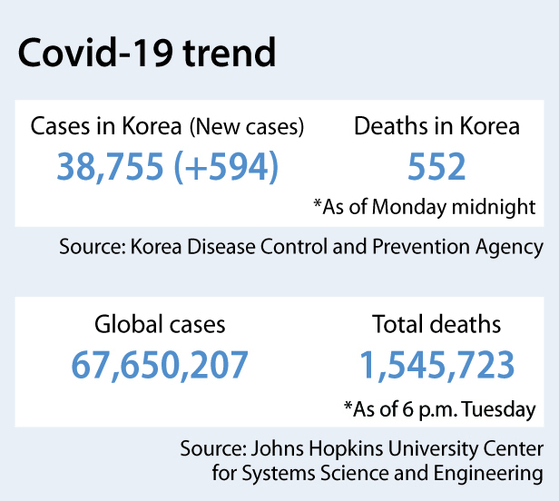 If everything goes as planned, AstraZeneca vaccines are expected to be the first to arrive in Korea next February or March once the company finalizes testing, Korean health officials said, without explaining when the other vaccines will arrive.

Park refused to get into logistical details and didn’t pin down a specific date as to when the public will be immunized, saying the government would spend ample time reviewing their effectiveness and check whether any other country that uses them experiences any side effects.

Park said Korea isn’t in as much of a rush to roll out the vaccines because its domestic outbreak is more controlled than in other nations.

If previous comments from other health officials offer any hints, Kwon Jun-wook, second vice chief of the Central Disease Control Headquarters, said last month that inoculations were expected to begin in the autumn of 2021.

“The vaccines haven’t been fully developed yet, and there are still risks in safety and effectiveness,” said Park. The government will “flexibly decide” when to start vaccinations after “considering the domestic Covid-19 situation, the demand from the [Korean] public, the vaccination trend in foreign countries and whether they see any side effects.”

Park continued, “If we were seeing huge surges in [Covid-19] cases like in Europe or the United States, and we didn’t have any other solution but to use the vaccines, then we would take the risk and push ahead,” adding, “But Korea is rather stably responding to the Covid-19 [pandemic], and at a time when the risks [of the vaccines] haven’t even been verified, I don’t think there’s a big need to rush.”

Once the vaccines finish clinical trials, Park said domestic research centers would run safety tests on them to screen any possible risks, after which the Ministry of Food and Drug Safety would examine them once more and run additional safety tests.

Inoculations will be based on consent, though health officials said they would use various ways to persuade people to get the shots, especially the 36 million people who have been earmarked by the government to get the first shots.

They include senior citizens, people with chronic diseases, frontline medical workers, in-home care givers, nursing home workers, police officers, firefighters and soldiers. Children and teens were excluded from the group, officials said, because most Covid-19 vaccines haven’t been tested on them.

Health authorities said the younger population will be inoculated after drug companies finish clinical trials on them and once the government deems them safe enough.

The ministry said it has allocated 1.3 trillion won ($1.2 billion) for the vaccine doses.

After the elderly and essential workers get their shots, the rest of the country will get theirs gradually.

The shots for the first 36 million people to be vaccinated will likely be covered by state budgets, whereas the rest of the country will have to personally pay a partial or whole amount. Park didn’t offer a specific price, saying ministries were currently discussing the matter.

A taskforce within the KDCA was said to be planning the logistics, including how the Pfizer shots, which have to be stored at minus 80 to minus 60 degrees Celsius (minus 112 to minus 76 degrees Fahrenheit), can be distributed.

The Health Ministry bushed off accusations it wasn’t moving swiftly enough to secure the vaccines, saying it began pre-purchase negotiations with drug makers last June. Officials said they could have signed pre-purchase deals as early as in July, but instead decided to “continuously” demand clinical trial data from the companies and peruse the papers with experts to be confident about their safety and effectiveness.

Until the vaccines arrive, health authorities vowed to lower Covid-19 cases as much as possible through their own preventive measures — which in recent days, are barely having any effect.

Out of 594 people who were diagnosed with the virus Monday, 566 were due to domestic infections —  212 in Seoul, 146 in Gyeonggi, 61 in Ulsan, 27 in Incheon, 25 in Busan, 15 in South Chungcheong, 13 in North Jeolla, 12 in South Gyeongsang, 10 each in Gwangju, Daejeon and North Chungcheong, eight in Gangwon, seven in South Jeolla, five in North Gyeongsang, three in Daegu and two on Jeju Island.

Among Korea’s 17 major cities and provinces, Sejong City was the only region that didn’t add a single new case.

Three patients died Monday, raising total deaths to 552, while 349 patients recovered, bringing entire recoveries to 29,650. As of Monday at midnight, Korea had counted 38,755 Covid-19 patients in all.