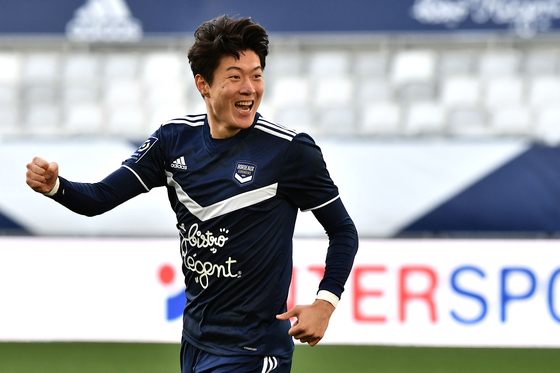 Hwang Ui-Jo of Bordeaux FC celebrates his goal during the French Ligue 1 match against Angers on Sunday at the Nouveau Stade de Bordeaux in Bordeaux, France. [AFP/YONHAP]


Hwang Ui-jo of Bordeaux FC scored both goals in the French side's 2-1 victory over Angers in their Ligue 1 clash on Sunday.

After a shot by teammate Samuel Kalu deflected off a defender, Hwang picked up the ball just shy of the right post. With seven Angers players swarming the crowded box, Hwang was able to chip it over the goalkeeper into the top left corner.

Three minutes later Hwang was back again. Picking up a well-placed through ball on the run, the Korean forward beat the last defender before slotting the ball through the goalkeeper's legs to find the back of the net.

Up 2-0 in the first 11 minutes of the game, Bordeaux just needed to hang on for the remaining 79 minutes to take home three points. Although Angers came back with a single goal in the 28th minute, they weren't able to overcome Bordeaux's lead.

Hwang has now scored a total of five goals for Bordeaux this season, making him the French club's top goal scorer. Before Sunday's game, Hwang scored his third of the season one week earlier in the team's 3-0 victory over Nice.

Bordeaux have now risen to seventh in Ligue 1, with nine wins, five draws and seven losses.

Hwang initially struggled after moving to Bordeaux in 2019. Having played as a forward throughout his career in Korea and Japan, Hwang struggled to adjust as his new coach initially had him play on the wing. This season, Hwang has seen much more success as he has gradually moved forward.

"I'm happy for Hwang and his two goals, and he never hesitates to drift wide. He's a brave player, finding his feet," Bordeaux Coach Jean-Louis Gasset was reported as saying in French radio station RFI.

Hwang has been on a hot streak recently. As well as starting this Ligue 1 season strong, he was also in action with the Korean team at the end of last year. During Korea's ill-fated international fixtures in November last year, Hwang scored two goals, one against Mexico and one against Qatar.

Bordeaux will be back in action on Jan. 29 with a Ligue 1 match against the No. 3 side Lyon. The game, at Parc Olympique Lyonnais in Lyon, France, will be broadcast at 5 a.m. on Jan. 30 in Korea.