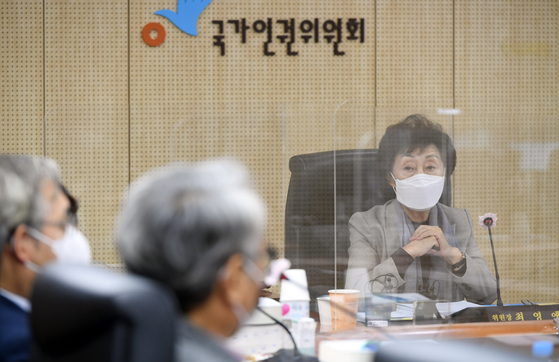 National Human Rights Commission of Korea Chairperson Choi Young-ae chairs the final meeting of the commission regarding its investigation into allegations that former Seoul Mayor Park Won-soon sexually harassed his former secretary. The commission announced on Monday evening that he did. [JOINT PRESS CORPS/YONHAP]

“The victim's claim that Mayor Park sent inappropriate messages, photos and emojis to the victim late at night and touched the nails and hands of the victim in his office has been accepted as truthful,” the commission said on Monday evening, in concluding its six months of investigation.

“Mayor Park's behavior falls within the category of sexual harassment through verbal and physical communications that make the other person feel sexually ashamed or disgusted [...] according to the National Human Rights Commission Act.”

The victim's lawyer requested the commission in August 2020 to investigate whether Park sexually harassed the former secretary for years. The lawyer claimed that Park made unwanted sexual advances toward the victim, including touching her nails and hands, getting too close while taking selfies together in his office, sending her inappropriate messages and putting his lips on her knee after seeing that it was bruised.

The commission said that the working environment may have been part of the problem.

The former secretary’s duties included assisting the mayor with some tasks such as taking care of his laundry or preparing fresh underwear after he showered at the office, which blurred the lines between the professional and personal, the commission said.

“The ambiguity in the former secretary's role made it difficult [for her] to draw a clear line in her tasks,” said the commission in its report. “In addition to helping manage the mayor’s schedule, the secretary took care of personal affairs like [...] managing his medicine, taking his blood pressure or going grocery shopping for the mayor.”

The commission added that over time, such routines could have been accepted as a norm among officials at the city government.

“Instead of questioning and realizing that there may be a problem in this kind of working environment, the coworkers brushed it off as a matter of friendly relations between the mayor and the secretary,” the commission said.

In its report, the commission added that there were other worrying practices involving secretaries working for the mayor.

“It has been a practice at the city government to hire women in their 20s to 30s as the mayor’s secretaries, which seems to stem from the stereotype that women are best at tasks that require taking care of another person,” the commission said.

In August 2020, the commission began its investigation into whether Park sexually harassed his former secretary and whether officials in the city government turned a blind eye to it despite her requests for help. The victim’s lawyer requested the investigation. The commission has no authority to press criminal charges.

The former secretary filed a complaint with the police on the evening of July 8, 2020 claiming that Park sexually harassed her for years and that her coworkers turned a blind eye to his conduct despite her calls for help.

Park found out about the former secretary’s intention to file a complaint a few hours before it was filed, according to prosecutors, from his special adviser on gender equality. Park went missing the next day and was found dead on July 10. Police concluded he committed suicide.

In concluding their investigations on Dec. 29, 2020, the police declined to disclose their findings as to whether Park’s suicide was tied to the sexual harassment allegations.

By law, any investigation into Park's misbehavior was closed due to the death of the suspect.

The Seoul city government announced Tuesday that it accepts the findings of the National Human Rights Commission of Korea and will make changes at the city government to ensure gender equality in its practices.

“The Seoul Metropolitan Government accepts the results of the investigation by the commission with a repentant and reflective attitude,” Seo Jeong-hyup, acting mayor of Seoul, said in a statement on Tuesday. “We would like to apologize to the victim and her family, who are undergoing a time of great trial and to all members of the public who have been greatly concerned and disappointed by the case.”